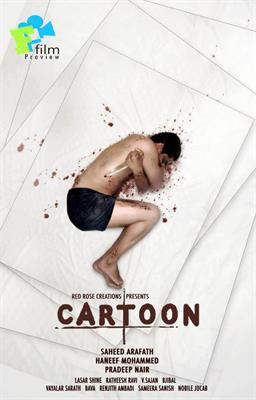 Young actor Fahadh Faasil is having a bright year with a number of movies in kitty. Fahadh who had made a wonderful start with Annayum Rasoolum, will be seen in Anchu Sundarikal, Olipporu, Artist, North 24 Kaatham and a couple of unitited projects in 2013.

Cartoon, the directorial debut of Saheed Arafath will feature Fahadh Faasil in lead. Prasanth Pillai who composed the hit songs of Fahadh's last film, Amen will tune the songs of Cartoon too. In the banner of Red Rose International, 'Cartoon', is being produced by Haneef Muhammed.

With the first look of the movie and the character of his role under hush, 'Cartoon' will go on floors in December. Even though not much is known about the project, heard from the grapewine, the film would focus on a unique theme, to be the first of its kind in malayalam. Scripted by Lazer Shine and Ratheesh Ravi, 'Cartoon' is about Moral policing.

As Moral policing, vandalism and interference into one's privacy and related annoying incidents have become common in Kerala. Innocent people have been victimized for the so called moral policing which made the writers to deliver a subject which stand aside from others. With people giving positive and negative arguments about Moral Policing, the theme is going to be much interesting which would carry a message too.

Fahadh Faasil, the most wanted young actor in malayalam is shuttling from location to location with too many projects to complete in 2013. Fahadh who made a return to big screen with Kerala Café rose to popularity with his acting brilliance shown in Chaappa Kurishu. Movies like 22 Female Kottayam, Diamond Necklace, Friday, Annayum Rasoolum, Natholi Cheriya Meenalla, Red Wine, Amen and Immanuel were much enough to show his capability as an actor. In Anchu Sundarikal, 'Aami' directed by Anwar Rasheed, Fahadh will be seen along with Honey Rose and Asmitha Sood.