With bollywood and tollywood films getting shot at foreign locations, malayalam film makers are thinking different. After Rajesh Nair's 'Escape from Uganda', now it's the turn of Vayalar Madhavan Kutty to take his team for an adventurous journey to be shot exclusively in South Africa. Titled 'Naku Penta Naku Taka', the movie will feature Indrajith, Bhama and Murali Gopi in lead.

Naku Penta Naku Taka are African words which means I Love You, I Want You. Scripted by Jayamohan, the movie will be blessed with music set by Gopi Sunder. The movie will be produced by Gokulam Gopalan under the banner See Gokulam Movies.

With the taste of the young movie lovers in Kerala has changed, malayalam film makers are also trying to add the ingredients which could keep them intact.

Popular Tamil-Malayalam scriptwriter Jayamohan who has shown his skill would lend his hand framing the story of the movie. Jayamohan had stayed behind the screen scripting for the movie Ozhimuri and yet to be released movie Kanchi. 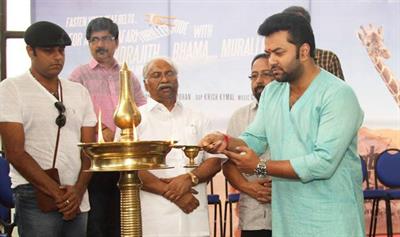 'Naku Penta Naku Taka' would be a treat for the movie enthusiasts who wish to enjoy the visual beauty of Africa. Krish Kaimal who has shown his mettle staying behind the screen would helm the camera and would zoom into the alluring places of South Africa.

Vayalar Madhavan Kutty who has mesmerized the small screen viewers with his previous projects is keeping an eye on the big screen too with his maiden venture 'Naku Penta Naku Taka'.

To be credited as the second movie in Malayalam to be shot completely in Africa after 'Escape From Uganda', this movie would bring about changes in filmmaking in malayalam.

With 'Escape From Uganda' gearing up for late 2013 release, 'Naku Penta Naku Taka' is expected to get released in the first quarter of 2014. Don't go away Suneesh Kumar who has an experience of working behind the camera as an associate with Rajiv Menon and Suraj Varma would debut with 'Waka Waka Africa' shot exclusively in Africa.