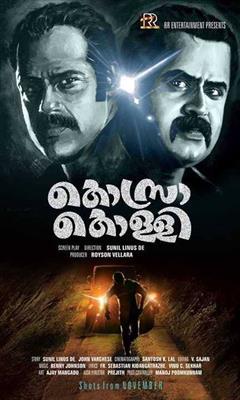 Yet another gifted young talent is stepping into the glamorous world of entertainment. Sunil Lenus D who has proved his mettle as an artist and ad film director is helming an interesting project, a suspense thriller which is creamed with all essence to entertain the audience.

Titled 'Kosarakkolli', the movie is embodied based on the universal law that while destroying an individual from the cosmos, the nature itself would make the reason & situations to substantiate it.

Anoop Menon and Murali Gopi who are currently standing at the peak of their popularity would be seen in lead. Bhagat Manuwal,Sreenath Bhasi, Richard, Jojo Mala, Josukutty, Kichu, Niyas Marikkar & Sethulakshmi would give life to other characters in the movie. Scripted by Sunil himself, the movie is produced by Royison under the banner R.R Entertainment.

For the lyrics of Rev.Father Sebastian Kidanguthazhe and Vinu C Sekhar, the music is being set by Benny Johnson. The shooting is in progress at Kochi, Kottayam and Kuttikkanam.

The movie set at the backdrops of the holiness of a village and Christian background is well powered by the terrific mechanism of the city. Interestingly some real life incidents which happened a few decades back will be featured in a natural way. The 1987 bus accident which rocked Kuttikkanam will be shot at the same place which would form the essence of the story.

Murali Gopi plays the role of a villager, a very harsh and mischief person while Anoop Menon acts as a planter and film maker who hails from Idukki. Sunil being a renounced drawing artist has perfectly portrayed the appearance and feel of the two characters which is witnessed through the first look poster of the movie.

The movie lovers would get a unique chance to enjoy the one to one acting brilliance of Murali Gopi and Anoop Menon on big screen. With the final cute, 'Kosrakolli' would reach theatres during the first quarter of 2014.