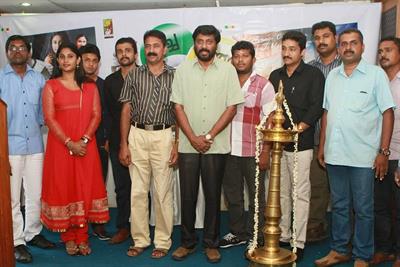 Robin Joseph who has worked behind the camera for a number of movies as assistant director is gearing up for his first independent project. Titled 'Pacha Manja Chuvappu', the movie will have Biyon and Chinchu Mohan in lead.

The movie being produced under the banner Trinity Films will have Praveen Prem, Ganapathy, Vishal, Devan, Sunil Sukhatha and Sethulakshmi donning important roles. Scripted by Vijeesh Kutyadi, the music of 'Pacha Manja Chuvappu' will be set by Gautham Gangan. The camera for the movie will be wielded by Shanmughan.

As the title 'Pacha Manja Chuvappu', the story of the movie travels through different phases of life. Being a film maker, Robin Joseph would give his best to give life to the characters set by Vijeesh. The movie would be a visual treat creamed by all essence to keep the audience intact.

Young brigades Biyon, Praveen Prem and Ganapathy will be seen in lead roles while Chinchu Mohan who has show her mettle in acting through movies like Omega.exe, Pottas Bomb dons the lead lady.

Biyon who had been a part of the malayalam film industry for more than 2 decades is excited to be a part of fresh team. Biyon started acting in 1989 with Oru Vadakkan Veeragatha has already acted in 50 movies. Biyon who was too much blessed to work with some of the legendary actors is one among the actors who could keep the same pace even after 23 years of his acting career.

The actor is looking forward for the release of 'Parankimala and 'Chakara'. Directed by Nick Fletcher & Stephen Croso, 'Chakara' had locations set at UK, Spain and Kerala. On the other side 'Parankimala' is a pure love story told heart to heart.

'Pacha Manja Chuvappu' would be a real break for Chinchu to create her own space in the industry.