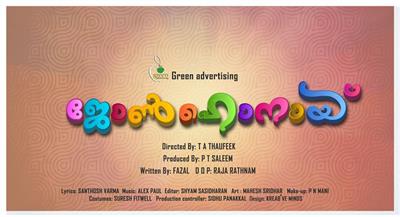 John Honai, the immortal villain who had been haunting the movie enthusiasts for a couple of decades is making a return in the 'title role' through T. A. Thaufeek's directorial debut. Titled 'John Honai', the movue is said to be a complete entertainer creamed with humour and suspense.

After featuring as the desperado in 'In Harihar Nagar', the character is back in action with new plans and purposes. But much interestingly, it would only be the name which would be recreated and not a sequel of 'In Harihar Nagar' which was a blockbuster.

From the words of Fazal, the script writer, the movie will be a complete entertainer which could satisfy the all generation audience. 'John Honai' will feature Krish J Sathar and Ansiba Hassan in lead.

Thaufeek who had been in the industry since 2000 as an ad film maker, actor and producer is gearing up to shoulder his maiden venture which is being creamed with humour and suspense.

For the lyrics of Santhosh Varma, the tunes will be set by Alex Paul. Scripted by Fazal, the movie is being produced by P.T Saleem. Siddique, Mukesh, Jagadeesh, Riza Baba, Ashokan, mamukoya, Navas, Abu Salim and Sreekumar will give life to other prominent characters in the movie.

'John Honai' will start rolling from 1st April with locations set at Kochi and Dubai. Riza Bava who had given life to the character John Honai is all prepared to play an imperative role in this new movie. Drishyam girl Ansiba who had made an impressive start in malayalam will play the female lead.

T. A Thaufeek being a multitalented artist had proved his skill behind the camera is known for his commitment and have a thirst to do good cinema. According to Thaufeek, "Filmaking is an art of spontaneous over flow of feelings and ideas from the depth of heart".

After his majestic appearance in movies like 'God for Sale' and 'Lissammaude Veedu', the youngster is gearing up for his maiden venture.