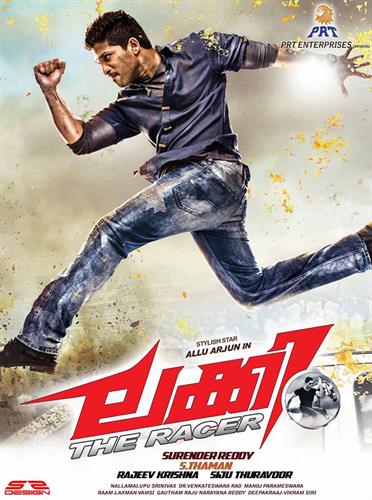 After making his presence alive on the silver screen of Kerala, young stylish hero Allu Arjun is all set to create sensation with his latest flick. Titled 'Lukcy The Racer', the movie will be a clean entertainer for the fun loving mass. Allu Arjun who had won the heart of millions of movie lovers in Kerala is gearing up to entertain the mass audience.

'Lucky The Racer' is the dubbed version of the telugu movie 'Race Gurram' which means Race Horse. His early releases like Krishna, Simhakutty , Killaadi, Happy II, Badrinaath, Gajapokkiri and Romeo & Juliets got well reception in the Kerala box office. The movie made with a whooping budget f 41 crores is expected to bring much return for the producers. The main highlight of this movie would be the sizzling dance performance by Shruthi Hassan, stylish dances and breath taking fight sequences.

Surender Reddy, who is much known for helming stylish action movies like Ashok, Kick and Oosaravelli has well experience in delivering the best for the audience. This of 2 hours and 20 minutes lengthy movie has got a 'U/A' certificate for its intense action scenes.

Even though the story of the movie is kept in silence, heard from the grapevine, 'Lucky – The Racer' revolves around two brothers played by Allu Arjun and 'Kick' fame Shyam. Allu Arjun dons the role of a police officer named Lucky, who eventually collects proofs about some illegal activities committed by a minister and hides them in a car. Shyam takes the car not much aware about a secret file hidden in it. As the file gets stolen, Lucky had to arrest his own brother. But later Lucky gets the file back and rescues his brother.

Shruti Hassan is essaying the role of Allu Arjun's love interest while Brahmanandam will be seen in the role of a police officer who helps Lucky to take revenge against his enemies. Saloni can also be seen in a prominent role. Already some of the songs of Race Gurram composed by SS Thaman have topped the chart-busters. Even though, Race Gurram is scheduled for a world wide release on 11th April 2014, 'Lucky –The Racer' its dubbed version will reach theatres little late due to unavailability of theatres.