Yet another movie featuring a young cast is under making. Directed by debutante Raju Champakkara, the movie titled 'Nakshathrangal' is set against the backdrops of a traditional Brahmin house will have Pinky Alphons and Sachin Anand in lead roles. As the name suggests, 'Nakshathrangal' is a fantasy movie which reflects the old customs and traditions in Kerala. The movie is themed around the Thrikavoor traditional home which is currently occupied by Keshavan and his three daughters. 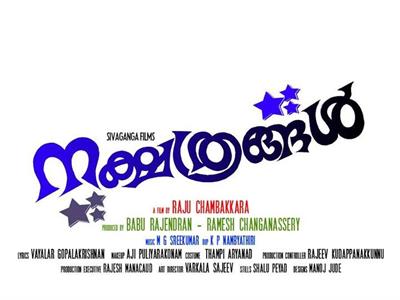 While going through the horoscope of her daughters, he found that his elder daughter Sree Lakshmi had some problems with her birth time. This brings some issues in her personal life which even delays her marriage. Living with a worried mind, Sree Lakshimi is ill treated by her family members. She got some time to get refreshed while having a talk with Devaki Andharjanam, her aunt.

According to the suggestion given by an astrologer Kalidasa Thirumulppadu, he was forced to 'Sopanasangeetham' in the house. Yadu who enters the family to perform the 'Sopanasangeetham' falls in love with Sree Lakshmi. But during the while, the family members decided to compel Sree Lakhshmi to leave the house. The rest of the story takes the movie to the next stage with interesting incidents happing later.

Yadhu who has appeared as hero in Suku's 'Kalabha Mazha' will be appearing in a prominent role in the movie. Yadhu has taken leave from the government job to act in 'Nakshtrangal' looking forward for a bright future in the film industry.

The movie produced by Babu Rajendran and Ramesh Changanassery under the banner of Sivaganga Movies is blessed with the presence of Kozhikode Narayanan Nair, Maniyan Pillai Raju, Niyas, Ponnamma Babu, Ramesh Pisharady, Cyril, Vinon and Shenthil. For the lyrics of Vayalar Gopalakrishnan and Vijayan Kadanadu the music is set by M.G Sreekumar. The camera is helmed by K. P. Nambiathiri. The shooting of the movie was completed at various locations at Chenganaserry.