After wrapping up the shoot of Joshiy's 'Avathram', Janapriyanayakan Dileep has joined the sets of Sudheesh Shankar's directorial venture. Titled 'Villali Veeran', the movie film has kick started its first schedule in Thodupuzha. Namitha Pramod and Mythili and the lead heroines of the movie which is being produced by South India's leading production house Super Good Movies. 'Villali Veeran' is themed around the life of Chinnannan, a vegetable vendor. 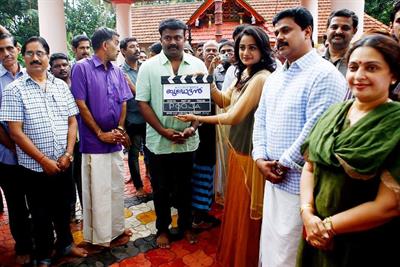 Chinnannan (Dileep) a peculiar character by nature is a true hearted person who spends much for his large extended family. Even though restricting for his needs; Chinnannan has no qualms in spending for those who takes care of him. Living with a mysterious past, Chinnanan meets a girl Narmada (Namitha Pramod) who unfolds the secrecy in his life. The story takes a leap with the entry of Narmada.

Alappuzha and Mumbai are other locations of the movie. For the lyrics of Murukan Kaattakada and Rafeeq Ahamed, then music is set by S A Rajkumar.'Villali Veeran', creamed with humour would reach theatres as an Onam treat. This movie is produced by the leading production house Super Good Movies.

Sudheesh Sankar who is much popular among the small screen viewers has directed serials such as 'Ente Manasaputhrikku,' 'Kanakkinavu,' 'Alippazham,' and 'Omanathinkal Pakshi.' He also got appreciation for his works like 'Chilanerangalil Chila Manitharkal' has adapted Jnanpith winner Gurdial Singh's Punjabi novel 'Adhdh Chananhi Raat,' to 'Ardhachandrante Rathri which was telecast on Amritha TV.