Even though getting in only in a couple of movies as heroine, young gorgeous Keerthy Suresh is on cloud nine with more projects in kitty. Keerthy, daughter of yesteryear actress Menaka Suresh and veteran producer Suresh Kumar is truly blessed with parents who gave full support for her acting career. 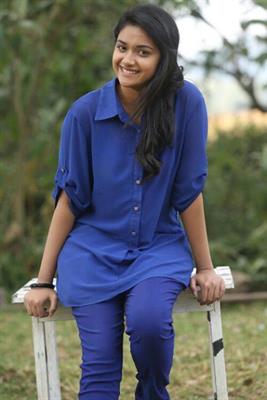 After appearing as a child artiste in movies like Pilot, Achaneyanenikku Ishtam, and Kuberan and in a tele-film by Suresh Krishna, Keerthy is gearing up to start her work with a new season lending her face in 'Darboni' directed by debutante Biju.

To fall under the genre of art film, 'Darboni' will have Devadevan, son of actor Vijayaraghavan doing a prominent role. Keerthy would give life to a Kashmiri girl which would be totally different from her previous ventures; double-role in Geethanjali and a visually-challenged girl in Ringmaster.

Loving to grab the role played by Kangana Ranaut in the movie 'Queen', Keerthy is looking forward for her upcoming telugu movie 'Idli' and untitled malayalam project directed by Priyadarshan and produced by her father Suresh Kumar. Keerthy wishes to attain more level of acting in her future career by doing challenging characters which has ample scope to perform. After attaining a degree in fashion, the young actress will channelize her time in doing worthful movies. She also aspires to work with projects which could explore her acting skill.

Keerthy also likes to do memorable characters which people could keep close to their hearts. Unlike her pervious ventures, Keerthy has decided to spend time to listen to scripts rather than giving the work to her mother. Being a fashion designer by profession, Keerthy might try a hand at costume designing for her own roles in the future. With a strong backup from the family, Keerthy seeks to create her own space in the south Indian film industry through her upcoming ventures.