The Kerala Public Service Commission (Kerala PSC) an apex body known for recruiting personnel in government has published the date and syllabus of the Armed Police Sub Inspector exam 2014. It is very important that the applicants of the armed police sub inspector trainee (Category No: 257/2014 to 259/2014) exam should get a clear idea about the syllabus much prior to the exam. 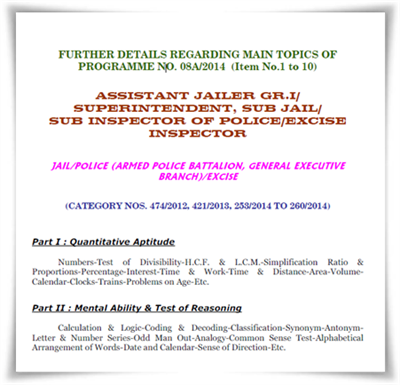 The armed police sub inspector trainee exam is scheduled to conduct on 2nd August (Saturday) 2014 from 1.30 PM to 3.15 PM at various centres in Kerala. Candidates can download the admission tickets through their one time registration profile in the Kerala PSC websitewww.keralapsc.gov.in from 19th July onwards.

The preliminarily test consists of an objective type exam (OMR Valuation) based on the qualification prescribed for the post. The exam duration will be 1 hour 15 minutes with maximum marks 100. With less than a month remaining for the exam, candidates need to undergo hardcore training either self learning or crash courses conducted by various coaching institutes. The syllabus of the Armed Police Sub Inspector exam 2014 would give a clear knowledge about the areas to be covered while having groundwork.

Here is the syllabus of the Armed Police Sub Inspector 2014 exam as notified in the Kerala PSC website. Divided into 8 parts, the topics for the exam are Quantitative Aptitude, Mental Ability and Test of Reasoning, General Science, Current Affairs, Facts about Kerala, Facts about India, Constitution of India, General English, Social Welfare Schemes & Measures, and Information Technology & Cyber Laws.

A predetermined selection procedure is being followed in all the exams being conducted by the Kerala PSC. According to this process, a preliminary objective type exam (OMR Valuation) would be conducted during the first phase of the exam. After the initial test scheduled to be held in 2nd August 2014, a shortlist will be arranged and the candidates who enter the list would have to attend the physical test to be conducted during the months of 2014 December – February 2015. In the later stage, those who qualify in the physical exams will be invited to attend the interview. After the final evaluation, the ultimate rank list will be prepared and it gets published in the PSC website by the 2nd quarter of 2015.