Malayala Manorama Thozhilveedhi, one of the prominent employment newspaper in Kerala has published its 22nd August 2014 edition. The current issue of 'Thozhilveedhi' is packed with arising opportunities in various fields. The highlights of this issue are the vacancies in Kendriya Vidyalaya, Naval Command, ICAR, KSUSP and VSSC. Solved paper of Kerala PSC Last Grade Servant, Excise Guard held on 13th and 16th August 2014 respectively has been published in the current edition. 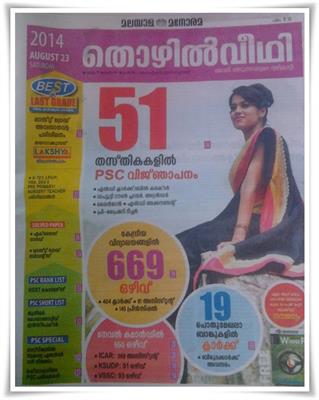 Like the previous issues, 'Thozhilveedhi' has given preference to GK in the newspaper and also in the free booklet 'Competitive Winner'. As General Knowledge is given prominence in exams and especially conducted by the Kerala PSC, the booklet will guide the candidates to score high marks. Being one of the most read employment newspaper, 'Thozhilveedhi' has become the companion of youngsters to enlighten themselves and also to building up a proper career. Established as an effectual platform for job vacancies for making a ground work for their career groundwork, this newspaper is widely read by millions.

If you are a job seeker, grab the 22nd August 2014 issue of 'Thozhilveedhi' from your nearest book vendor and live your dream.

This is very use for the people who are in search for a job. Thanks for providing the information.