Malayala Manorama Thozhilveedhi, one of the leading employment newspaper in Kerala has published its 30th August 2014 edition. Like its previous issues, the current issue of 'Thozhilveedhi' comes with a lot of arising opportunities in various fields. 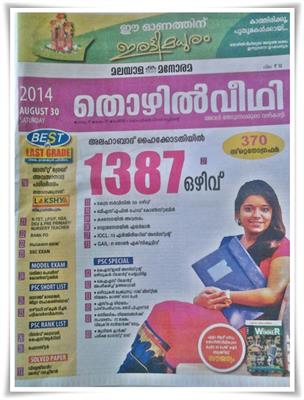 While going through the pages, 1387 vacancies in Allahabad High Court, 159 in Union Service, vacancies for Head Constable in BSF, Opening in Army, Air Force Airman, 113 in Engineering Assistant in IOCL and 81 Non Executive in GAIL are also reported. 67 vacancies in PDIL, 133 in Haryana, 87 in FDDI, 50 Stipend Trainee in RRCAT, 64 jobs in CMPDI are given with prominence. Crash coaching for Last Grade Exam, K-TET, LP/UP, HAS, DEd & Pre Primary,/Nursery Teacher, Bank PO, Cooperative Bank and SSC Exam are published in the 30th August 2014 issue of Thozhilveedhi.

The free booklist 'Competitive Winner' which is accompanied along with 'Thozhilveedhi' is a complete General Knowledge companion. As General Knowledge is given prominence in all prominent exams, this booklet will guide the candidates to score high marks. Being one of the most read employment newspaper, 'Thozhilveedhi' has delivered full support to youngsters to enlighten themselves and also to building up a proper career.

It has already established as an powerful platform for job seekers to prepare well and make a ground work for their career development. f you are a job seeker, buy the 30th August 2014 issue of 'Thozhilveedhi' from your nearest book vendor and make your dream come true.