Nadirshah, the multitalented personality who is well known as a singer, mimicry artist, lyrist, music composer and actor is gearing up to step into yet another field. After creating his own space in the film industry, Nadirshah is all set to helm a project with top actors in lead. 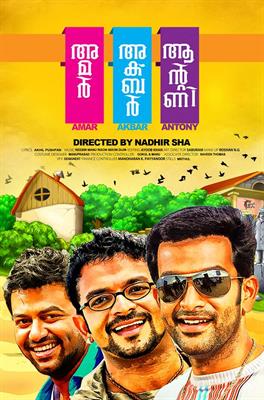 Titled 'Amar Akbar Antony', the movie with Prithviraj, Indrajith and Jayasurya would be an in and out entertainer which revolves around the life of three protagonists Amar, Akbar and Antony. After the finalization of the script and cast, the movie will start rolling by the end of March 2015. Nadhir Shah has discovered the talent of many artists who later become advanced to the stage of most wanted actors.

Scripted by Nadhir Shah himself, Amar Akbar Antony' will be a creamed with humour, thrills and suspense which would keep the audience intact. Even though his close buddy Dileep is not a part of his debut venture, Nadhir Shah has plans to make his second project with the actor. Earlier Indrajith, Prithviraj, and Jayasurya had worked together for Lal Jose's super hit movie 'Classmates'. This upcoming venture has already rose excitement among the moviegoers for its interesting star cast.

Prithviraj, Jayasurya and Indrajith are busy with their own individual projects. Prithviraj who has completed the shooting of 'Picket 43' and 'Tamaar Padaar' is waiting for its release. His upcoming movies include 'Ennu Ninte Moideen', 'Valathu Vashathe Kallan' while few others are under discussion. Young actor Jayasurya riding on the success of 'Apothecary' has a bunch of movies in kitty. 'Lal Bahadur Shasthri', 'Aamayum Muyalum', 'Mathayi Kuzhapakaranalla, 'Seconds' and 'Adu Oru Bheekara Jeeviyaanu' are few among them in line for the actor.

Meanwhile Indirajith's elder brother Indrajith would don the lead character in Jean Marcose's 'Angles' and important roles in 'Rasam' and 'Double Barrel'. Indrajith plays the role of ACP Hameem Hyder in Angels. His interest in direction was also reported during the shooting of the movie.