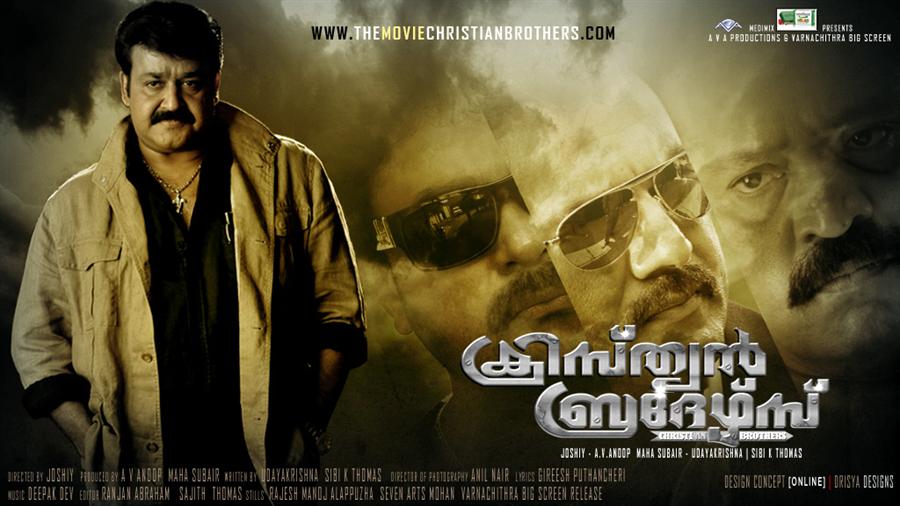 'Christian Brothers' is a much pomp and hype film to be released during the Onam season. After the mega hit of multistar 'Twenty twenty', Joshy comes again with such a big budget,multistar film. This film is supposed to be the most sensational film of the year even before it's release. The film has a long list of prominent actors and actresses in Malayalam film industry. The film is unique with the presence of Mohanlal, Suresh Gopi, Dileep, Kavya Madhavan, Kaniha, Lakshmi Gopala Swami and Lakshmi Rai. 'Pazhassiraja' fame Sarath Kumar is also having an important role in this movie. 'Christian brothers is penned down by the recent hitmakers Sibi K Thomas and Udayakrishna.

The Cast and Crew Behind 'Christian Brothers'

'Christian brothers' is the story of Captain Varghese Mappila(Saikumar) and his family. Captain Varghese Mappila is a retired Army Officer. He has four children-Christy(Mohanlal), Joby(Dileep), Stella(Kaniha) and Jessy(Lakshmi Gopalaswami). The brother jody of Mohanlal and Dileep was much appreciated in Joshy's previous multistar film 'Twenty-twenty'. The two brothers, Christy and Joby, were the dream of Varghese Mappilla. But on the contrary, dealing with underworld and crimes,Christy becomes a highly paid informer in the Mumbai region,. Joby is sent to abroad to study Theolohy. But, he also follws the same path as his brother.

Joseph Vadakkan(Suresh Gopi) is a Police Officer, who has some issues with the Christian brothers. Andrews Bandra (Sarath Kumar) is also an informer like Christy.But they are not in one ship. Kavya Madhavan comes as opposite to Dileep and Lakshmi Rai is the heroine casted against Mohanlal. The film also has the presence of Jagathy Sreekumar and Suraj Venjaramood. The makers behind the film adopted a new strategy in 'Christian brothers'. Initially, the whole film will revolve around the main heroes individually. And there after, the relationship and rivalry between them are shown. This is a film which moves through the tracks of family, crime and comedy.