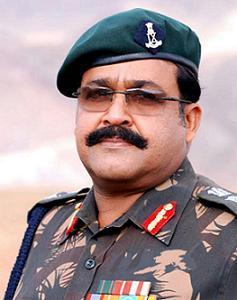 After the success of two military films Mohanlal is coming again as Major Mahadevan through the movie Kandahar. It's a big budget film directed by Major Ravi who was also the direct of first two parts Keerthi Chakra and Kurukshetra. The story of Kandahar is related to the relationship between Surya and Major Ravi. Major Ravi finds Surya in the streets fighting with gangsters and he brings Surya to Indian military. The Tamil actor Ganesh Venkittaraman is acting as Surya in Kandahar. Earlier there was roomers about Surya acting along with Mohanlal in Kandahar

The Big B of bollywood Amitabh bachan is also acting in Kandahar as Loknath Sharma, the father of Surya. He is going to act his first south Indian or Malayalam film in his career. The shooting location of Kandahar is Ooty. The main actors in Kandahar are Mohanlal, Amitabh Bachan, Sunil Shetty, Anoop Chandran. Ragini a new actress is the heroine of Kandahar.

The first Malayalam film of Mohanlal, the group behind Thiranottam movie.