Padmanabha swamy temple is the most famous temple of the Country, with LORD VISHNU as the Deity. This is located in the city of Trivandrum, which is the Capital of Kerala. This is only one amongst the 108 holiest shrines of Lord Vishnu. Th main deity, Padmanabhaswamy is a form of Vishnu in Ananthasayanam posture ie in eternal sleep - yoganindra. This is an ancient temple. The City's name Thiruvananthapuram gets its name from the name of the presiding deity shrined in the temple. 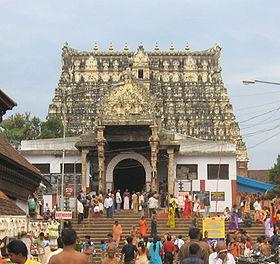 Padmanabhaswamy temple stands at a place reckoned as one of the Sevem Parasurama Kshetras - texts including Puranas, Skanda purana and Padma Purana do refer to this temple. Traditionally it is known that at this venue, Lod Vishnu gave darsan to Sages like Divakaramuni and Vilwamangalam Swamiyar. Another story tells of a Pulaya couple seeing Lord Vishnu as a small boy. The little Boy took morsels of Rice from the couple. As per beliefs, the sage Divakaramuni on seeing the Deity for the first time took the first food item he saw which was an unripe Mangoe and a coconut shell as an offering plate. He performed pooja. It is therefore legendary that naivedyam or offering prepared from rice is offered in a coconut shell to the Deity.

The IDOL is made of 12008 salagramams that compose the reclining Lord. They were brought on elephant top from Nepal after collecting from the banks of river Gandhaki. Believers say that the LORD has personally come in disguise and saved the Trivandrum Kingdom many a times from the attacks of enemies.


Alpashy festival falling in Oct-Nov. Painkuni festival lasting for 10 Days in March-April. The curtain for these festivals comes down with Aarat ie purification immersion of the deity in Shanmugham beach in Sea. The event takes place in the Evening. The King of Travancore leads the procession for the Aarat by foot. After this ceremony, the idol is taken back to the temple as a procssion in the light of traditional torches. Yet another festival is Navarathri. The idols of Saraswati, Durga and Murukan are brought to the Kuthira Malika palace in front of the temple which lasts for 9 days. Th famous Swathi music is an important event every year on this occasion. However, the biggest and most important festival is LAKSHADEEPAM. One lakh lamps are lit in the premises. This is only ONCE in Six years. The next LAKSHADEEPAM falls in January 2014. Chanting and reciting of Vedas is done for 56 days prior to the start of the Festival.

Read this article to know all the details of the gold treasures unearthened from Sree Padmanabhaswamy temple, Thiruvananthapuram in Kerala. Sree Padmanabhaswamy temple in Thiruvananthapuram district of Kerala has become world famous after massive amounts of treasures of gold and precious stones have been retrieved from the undergrounds chambers of the temple.

Very good article. Mr Sreekumar has covered almost all aspects about this temple. I have not visited this temple sofar. Now I want to go to this temple and would like to have a darshan.

Thanks Neenu.. You should visit Trivandrum, camp there for a day and have detailed darsan with guidelines for dos and donts.. The history part of each activity in the temple is worth learning.