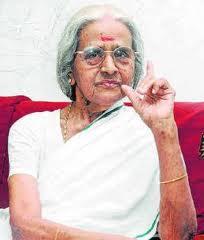 Aranumala ponnamma passed away, Aranumala ponnamma was Malayalam cine actress who acted in more than 500 films. She was hospitalised for more than weak, after she got a born fracture. She was in critical state for few days; Doctors confirmed her death on about 5.30 pm on 21-02-11. She was 96 years old

By the beginning of 90's she limited her presence in Malayalam cinema, she acted her last four films with Suresh Gopi, who married her Grand Daughter. She was mother figure to the whole the industry, she kept close relationship with the prominent figures in politics and Art.

She began her acting carrier though Plays, she acted opposite to Augustine Joseph, in a play titled Bhagyalakshmi. I t was whrn she was 29 she got in too the movie industry, Aranumala ponnamma made her acting Debut in there movie Sasidharan(1950). She acted in more than 500 movie along with super stars of the time. She was a good Karnatic Music

Aranumala ponnamma is the only lady artist to be facilitated with J.C. Daniel Award for Lifetime Achievement in 2006. She receive second best actress award in national and state level for the movie Kathapurushan(1995), directed by the Master crafts man Adoor Gopalakrishnan.