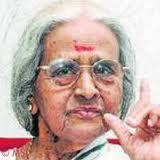 The mother of Malayalam film world, Aranmula Ponnamma died on 21st February 2011 evening. She had been in a hospital due to some health problems. She was 96 years old at the time of here death. She had been hospitalized for more than one week time for the bone fracture.

Aranmula Ponnamma was born on 22nd March 1914 as one of the five children of Malethu Kesava Pillai and Parukutty Amma in Aranmula, Pathanamthitta, Travancore. She started her carrier with Carnatic music violanist at a small age of 12.

Aranmula Ponnamma entered into Malayalam acting world with her 'Bhagyalakshmi' opposite Augustine Joseph, father of K J Yesudas. Her debut Malayalam film is Sasidharan(1950). Her further roles as mother in Malayalam film typecasted her into mother of the Mollywood. She is one such actress who had acted with the first, second and third generation actors. She had acted in more than 500 movies.

Aranmaula Ponnamma bagged both State and National Award for Kathapurushan, directed by Adoor Gopalakrishnan.She is the only lady artist in Mollywood to get J.C. Daniel Award for Lifetime Achievement in 2006.