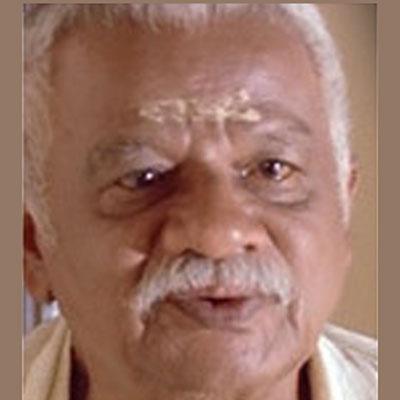 Playwright He started his career as a playwright by writing the plays 'Mareechika & Kalakaran'. Both of them were highly successful. He then wrote another 3. By these plays he revolutionised the plays by changing them from melodramatic, romantic musicals to dialogue centered plays. His plays were having realism and social importance.
ActorHe is best known as an actor. He entered into Malayalam Film industry in 1950 from stage. Till then there were only about 10 Malyalam films produced. His debut in the film industry was with the launching of the film adaptation of his breakthrough play Sthree with the same name. He produced the film and played a role as well. It was a flop. Thikkurissi's next film Jeevitha Nouka (1951) produced by K and K Productions and directed by K. Vembu was a turning point in Malayalam film history. The film which dealt with the theme of ego clashes in a joint family was a big commercial success and is being touted as the first super hit in Malayalam film history, making him as the first Malayalam Super Star in 1951. This film was so successful that it was dubbed in 4 other languages including in Hindi. After that he had a fare share of hits and flops. He has acted in over 700 films during his film career of 47 years. He is considered as the 1st Malayalam Movie star.

Sukumaran Nair was born on the 16th of October, 1916 in a village by name Thikkurisi. At the time of his birth the village was in the then Travancore. Now the place is in Nanchilnadu of Knyakumari Dst in Tamil Nad. His parents were Mangat C. Govinda Pillai and N. Lakshmi Amma. The Mangat family was an aristocratic family of that time. He studied in Marthanda Varma School. Though his parents wanted him to be a Government Employee, opted for literary work and did not complete his studies. He wrote his 1st poem when he was 8 years old. At the age of 14 this poem was published and at 20 all his poems were collectively published in a book under the name 'Kedavilakku'. His sister Omanakkunjamma was the 1st lady Magistrate in Kerala and in India and he first lady I A S Officer from Kerala.

His 1st wife was Sarojini Kunjamma from an eminent family. They had 2 daughters Shyamala Devi alias Lekha and Geethambika. After parting ways with 1st wife he married a play actor Ambalapuzha Meenakshi Amma. From this marriage he has a son who is in Chennai. This marriage was short-lived. He then married a singer dancer K Sulochana Devi. In this he had a daughter, a poet, Kanakasree who had a name as a poetess. She died early in an accident.

Thikkurissi is the recipient of Padmashri from the Government of India, which is one of the highest civilian honours in India. He has received several film awards.

He died on 11th March, 1997 at Trruvanthapuram, Kerala due to Kidney failure.