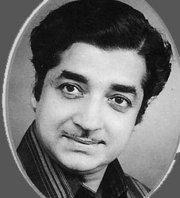 Prem Nazir, the famous Malayalam actor was born in the year 7 April 1926 to Shahul Hamid & Asmabeevi. It should be noted that Prem Nazir is considered as the evergreen hero of Malayalam cinema. His first Malayalam film was Marumakal which was released in the year 9 May 1952. The film Marumakal was produced by Paul Kallungal & directed by M.K.Chari. Remember that Prem Nazir was credited as Abdul Khader(original name itself) in this film. But this famous actor was renamed as Prem Nazir in his second film Visappinte Vili. He was renamed by Padmashri Thikkurissy Sukumaran Nair. Visappinte Vili is a film produced by K. V. Koshi & Kunchacko but directed by Mohan Rao. This film was released in the year 22 August 1952.

For the great contribution to Malayalam film industry, Prem Nazir had won 4 Guinness records in his career. It should be noted that Prem Nazir had won this award for acting opposite eighty heroines, for playing lead role in 720 films, for playing opposite the same heroine (sheela) in about 107 films & for acting the lead roles in 39 films( all were released in the year 1979).

Some of the important films of Prem Nazir