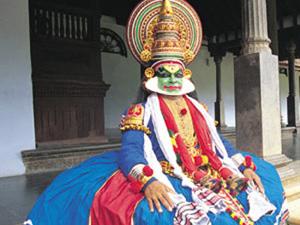 Kathakali is a very unique form of dance. Universally, Kerala is known to be the origin of this art. It is an art comprising a balanced combination of drama, music and dance. It is known as the 'total art form of immense sophistication and power'. One of the most famous Kathakali exponent is Tottam Sankaran Nambutiri.

Kathakali can be enacted anywhere in the open air. As it is an after-dark or nighttime performance, a big Nilavilakku (a traditional lamp) is kept in front of the artistes. A piece of cloth called a tirasila is held by two persons as a curtain before the performance starts. Four instruments are mainly used namely, chenda, maddalam, chengila and elathalam. In this dance form, the actors do not speak but only act the padams (sections) through fitting symbols called mudras and facial expressions to the songs sung by the musician from behind. The songs used for Kathakali are composed in a language called Manipravalam (a combination of Tamil and Sanskrit). A very unique feature of Kathakali is its elaborate make-up system. The make-up comprises of five basic sets namely Pacha (meaning green), Kathi, Kari, Thaadi and Minukku.

The original form of Kathakali was known as Ramanattam. It is said that a Raja (ruler) called Kottakara Tampuran had invented the present Kathakali. But this is doubtful as there are indications of an earlier origin of the art. A vast process of development has been made to make Kathakali reach the heights of perfection that is seen in it today. This development also includes the Ramanattam phase.

In olden ages, the people of Kerala had made some primal dance forms with a view to satisfy the lords of the hills. The witty or funny element of the dances in Kerala were brought by these tribal folks whereas the grim elements were brought by other dance forms developed in the Kalari. Eventually, both of these elements were combined. The temple arts of Koothu and Kootiyattam owe their development to the Chakiars who were a group of professional dancers. Under the rule of Manaveda (Zamorin of Calicut, North Kerala), a dance form called Krishnattam or the dance of Krishna was invented in which Krishna's life is portrayed in eight sections. This art became very popular in North Kerala. The Raja of South Kerala, Kottakara Tampuran was very impressed with Krishnattam that he requested the Zamorin to send his dancers to the south so that the dance form can be enjoyed even in that region. But the Zamorin refused the request saying that the people of the south did not have the taste and quality to value such art. Quite naturally, Tampuran was offended by this rebuke and invented a new dance form as an angry reply to Krishnattam and called it Ramanattam which portrays Rama's life. Here too, it was shown in eight parts. This act was composed in Malayalam by the Tampuran in the name of Attakatha. Along with dancing and acting, the artistes had to also sing the padams themselves. After that, a lot of improvements were made to give rise to the current day's Kathakali. These changes were made by the people who were immensely in love with the art.

A Raja of Vettathunad invented dance movements known as Kalasas. A musician was kept apart from the actors to sing the padams so that the artistes could devote their full attention to dancing and acting. The Raja also made wonderful changes to the costumes and the facial make-up of the artistes. Jackets and scarf's were introduced. Two additional musical instruments known as the drum (chenda) and the long finger drum (maddalam) were also introduced. A headgear was placed instead of masks of demon characters. Another Raja called Vidwan Tampuran of Kottayam ruling family (North Kerala) added few themes from Mahabharata to Kathakali to widen the scope of the artistes to emote with full expressions. It gave a completely new dimension to Kathakali and attracted many more audience. More improvements were made by Kaplingat Nambutiri, another lover of the art. The Thekkan Kalari (southern school) of Kathakali was developed under the joint efforts of Kaplingat Nambutiri and Karthika Tirunal Ramavarma, the famous Dharma Raja.

Recently, many developments have been made to Kathakali to keep up with the changing society. Initially, only Hindu themes taken from the Epics and Puranas used to be enacted but of late even non-Hindu themes are being performed. To begin with, Kathakali used to be performed throughout the night but lately this duration has been reduced to just two to three hours. Nowadays, even women have started to come into view in Kathakali presentations. In 1985, a Kathakali troupe was sent to Paris to give their performance at a show called Festival of India.