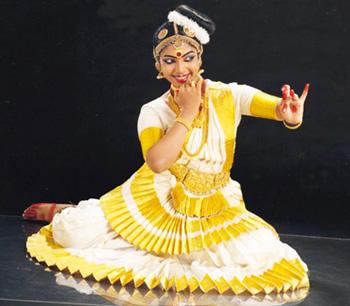 Mohiniyattam or Mohiniyattam is a traditional South Indian semi-classical dance form which originated from the state of Kerala in India. The meaning of the word Mohiniyattam is 'dance of the enchantress' which comes from the two words 'Mohini' meaning a woman who can lure people with her charming looks, and 'aattam' meaning graceful body movements. It is known as the dance of the celestial enchantress. This dance form is performed only by women with very graceful and slow movements. The theme of this dance form is ultimate love and devotion towards God usually depicting Lord Vishnu or Lord Sree Krishna as the lord who is worshipped through the dance. Shrimati Kalamandalam Kalyanikutty Amma is referred to as the mother of Mohiniyattam. Some of the other people who have immensely contributed to the development of Mohiniyattam are Swathi Thirunal Rama Varma and Shri Vallathol Narayana Menon. In the ancient days, Mohiniyattam was performed mainly by devadasis (temple dancers) in the temples of Kerala. Though it originated from Kerala, it was developed by a great Tamil dance master named Vadivelu who is one of the Tanjavur Quartet. Not only is the dance form performed only by women, but it is always performed as a solo recital. Mohiniyattam is a form of drama which is portrayed through a dance. It has glimpses of the other classical dance forms such as Bharatanatyam and Kathakali. It is quite tough to master Mohiniyattam.

The costumes used in Mohiniyattam are quite simple but elegant and beautiful with a white colour sari (only white colour is used always) which is brightly embroidered in golden colour at the edges. Sometimes there can be colourful borders too. The hair is always tied in a bun towards the side of the head with jasmine flowers adorned in it. The necklaces used in Mohiniyattam are of two types namely mangamalai and kasumalai. Some of the other ornaments include vanki (armband), odinayanan (waistband), nose stud and jhumki (earrings).

The dance movements are very slow and gentle with the swaying of the hips almost like the soft movement of the breeze and a circular use of the torso in a half bent position. One should always be in the erect posture while performing the dance. Mohiniyattam consists of almost 40 basic dance movements which are known as atavukal. The dance steps are very delicate which includes the Adavus - Taganam, Jaganam, Dhaganam and Sammisram. It involves a lot of both facial and gesture expressions. The dance movements are performed accompanied by a rhythmic musical composition known as chollu for which the lyrics are penned in Manipravalam which is a mixture of Sanskrit and Malayalam. Many of the dance movements in Mohiniyattam require the legs to be kept wide apart from each other which allows the hips to be moved in a gentle swaying manner. The person who is performing Mohiniyattam should be very skilled in the usage of her eyes to express them in a shy yet sensual manner. Lasya is the predominant element in Mohiniyattam dance form. Some of the musical instruments used to accompany Mohiniyattam include Shuddha Maddalam, Mridangam, Manjira, Veena, Tanpura, Kanjira and Surpeti.

There are two stories based on the Mohiniyattam dance form. One of the story is wherein Lord Vishnu disguises as Mohini or the celestial enchantress to lure the asuras (demons) away from the amrit (immortality and great power) that is gained from churning the palazhi or Ocean of Milk which is the place on which Vishnu reclines over the Shesha Naga. Lord Brahma tells the other Gods about how they can obtain amrit by churning the ocean of milk. As the job is really big, the Gods are forced to take the help from asuras. Though the asuras agree to help, they have their own plans of stealing the amrit so that they get all the powers from it. When Lord Vishnu gets to know about their plot, he takes the form of Mohini to distract them from their plot. Thus the amrit goes only to Gods and the world is saved from the asuras. Another story is that of Lord Vishnu disguised as Mohini to rescue Lord Shiva from the asura or demon called Bhasmasura.