Indian tradition of dance and theatre 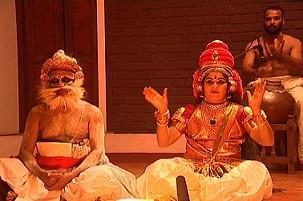 Our country contributed highly to different art forms, in which the dance and theatre forms have a very high position. Its history traces back to the second century BC. The name always quoted with this art form is that of Bharatha Muni. His work, 'Natyasastra' is an authentic reference text which is composed in 2nd century BC. It gives a detailed picture of the theatre art forms which include acting and dancing developed during those days. Others like Dattila and Kohala took up the traditions from Bharatha and introduced modifications. In the theatre side more contributions came from eminent writers like Bhasa, Kalidasa, Sudraka and Sriharsha, whose names are even now considered as topmost among the contributors in classic dramas. In short the period between the 2nd century BC and 6th century AD is considered as the 'Golden Era' of Sanskrit theatre in India. After this a slow decline of the trend has been recorded. It may be because of parallel developments started in different parts based on regional languages.

As far as Kerala is concerned the history was somewhat different. The developments in the theatre arts took place in other parts of the country did not influence Kerala's art forms. It took a few more centuries to originate its own theatre art forms. As per records available 'Matthavilasa', a dramatic work in Sanskrit (generally reckoned as "Kootthu" in the colloquial use) composed in 7th century was the first of its kind in South India. The first play composed in Kerala is believed to be 'Aascharyachootamani'. The next is 'Kalyanasougandhika' by Neelakantakavi. Later in 11th century two more plays were composed by Kulasekharavarma perumal. They were 'Subhadradhananjaya' and 'Tapateesamvarana'.

A playwright has to have good sense of the stage. Then only he can create apt characters and suitable scenes. Dialogues must suite to the context. Kulasekharavarman was good at both. He composed his drama with the stage sense. This motivated him to give performance text also with the play. He initiated the composition of 'Vyangyavyaakhya' a description of acting. Almost during this period the poet Tholan modified the conversations of the play by adding more witty and sarcastic remarks.


Chakyars were performing Kootthu, but it is not clear since when this came into being. (In Kerala 'Chakyar' is the title of a particular community. The women of this community are called 'Nangyar') "Chilappathikaram", the great Tamil epic has a mention about Chakyar Kootthu (Kootthachakkayan – Paravoor Chakyar). It is about a Shiv – Parvathy dance by Kootthachakkayan. There is no direct evidence to the fact that this dance was part of Kootthu. However, in the beginning of the present 'Kootiyattam' Shiv-Parvathy worship is done even now. The Kootthu form, as mentioned above, got established with Aascharya choodamani, Subhadra Dhananjayam and other works.
The Chakyar kootthu has two different parts, namely, drama acting and story telling. Manthramkam kootthu, Matthavilasam kootthu, Anguliyamkam kootthu, etc., actually are stage plays. Those plays with more than one character are referred as 'Kootiyattam' , whereas the presentation with a single character is called 'Chakyar Kootthu'. In Chakyar kootthu the character presents on the stage a story with jokes and witty remarks. Krishnanattam, Ramanattam (later modified as Kathakali) and Mohiniyattam are following basically the same tradition. Kootiyattam has been approved by UNESCO as a heritage art form. 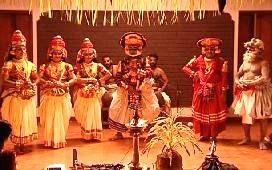 In Kootiyattam, generally both male and female characters appear on stage. The female roles are enacted by women (Nangyar) itself. (But the role of cruel/evil women - say, Soorpanekha - are taken up by male actors) . It is Nangiars who sing and play the small cymbals while the drama progress. (Nangiar alone presents a kootthu, which is termed as Nangiar kootthu).
In Kootiyattam certain musical instruments are used, namely, 'Mizhavu' (a large sized copper pot, with swollen middle portion and the upper mouth tightly tied with a leather sheet), small cymbals, Idakka (a small drum with leather caps on both sides), Samkhu (Conch) and Kuzhal (a sort of flute). The Mizhavu is the main instrument for Kootthu and Kootiyattam. Persons belonging to Nambiar community play this with their hand palms.

The characters appear on the stage with necessary makeup. Suitable costumes, ornaments, facial make up, head dress, etc. will be there, almost like those in Kathakali. Depending on the character there will be differences in the appearance. There will be a large oil (vegetable oil – those generally used in temples) lamp in front of the stage, which will be lit at the beginning of the presentation.

The characters act with almost all body parts. They make use of tongue (speak and sing), eyes, eye brows, face, hands, fingers, legs, and body as a whole in acting. Among the characters it is the jester, who appears very often in between the drama or act as part of the story, make the progress of the play interesting. Actually in simple Chakyar Kootthu it is a jester who narrates the whole story on the stage. While he goes on telling the story, he incorporates recent issues suitably and attracts the attention of the audience. Even audience will feel that the jokes are aimed at them.

The Kootiyattam is generally performed in a specially made hall, called 'Kootthambalam'. Many of the large temples were having these in early days. Even now some of the temples, like Thrissur Vatakkum natha temple, are having this and kootiyattam or kootthu takes place there occasionally. The architecture followed for the construction is as described in the Natyasastra of Bharatha Muni. There are three shapes suggested in it, rectangular, square and triangular which are ranked respectively as best, medium and bad. The one at Vatakkum natha temple has its length 25 meters and width 18 meters. Inside the hall a square stage will be there at the centre of one side, behind that green rooms will be arranged. The rest of the area in front of the stage are meant for seating audience.

Among the various Sanskrit plays presented as Kootiyattam, Bhagavathajjukam (The Sage and the Courtesan) is a popular one. It is a work by Bodhayana in 7th century. It is presented as a humorous satire. It depicts the story of 'Parakaya pravesha' (a soul entering into another body) and its after effects. It is a Buddhist Monk who conducts this exercise to substantiate it to one of his disciples, Shandilya.

The story goes like this. A courtesan Vasanthasena and her maid Parabhritika are sitting in a garden enjoying the scenes there, and starts singing with joy. The Monk and the disciple are also there but un-noticed by the girls. These two are are engaged in conversation. The disciple describes about the courtesan and her maid to the Monk. Also tells about the garden.

After the song is over Vasanthasena decides to pluck beautiful flowers from a nearby tree. Both of the women start plucking flowers while one snake bites Vasanthasena (It is actually Yama doothan, the Lord of death, who comes as snake). She becomes unconscious. Seeing this Monk decides to attempt 'Parakaya pravesha' and enters the body of courtesan. She wakes up and behaves like a Monk. On the other hand the Monk with courtesan's soul start behaving strangely like a lady. This creates confusion among those who are present there, which are presented in a jovial manner. Finally the re- exchange of the souls by Yama doothan solves the issue.