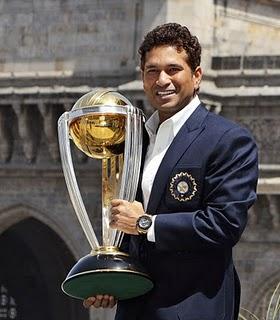 Sachin Tendulkar India's cricket god had been recognized once again by Wisden by naming him as the leading cricketer in the world for 2010. Sachin enjoyed 20 year's of his cricket life as being the year 2010 his best scoring more than 1500 runs in test cricket which has 7 hundreds. More than this sachin became the first batsman in ODI Cricket to hit a double hundred against South Africa. Master blaster Sachin's contribution in the ICC Cricket World Cup helped India to lift the dream cup after a gap of 28 years. He becomes the sevent recipient of the Wisden award which was instituted in 2004 to honour the legends of cricket.

Sachin the legend, first man in the history of the game score 50 test centuries

Yet another mile stone, the little master Sachin Tendulkar made history in the test Match against South Africa scoring his 50th Test hundred, he is the first man to score 50 Century’s in the history of the Game. He is the top run getter in the both form of the games and he holds the record for max number of Century’s in both Test Cricket and One day cricket.