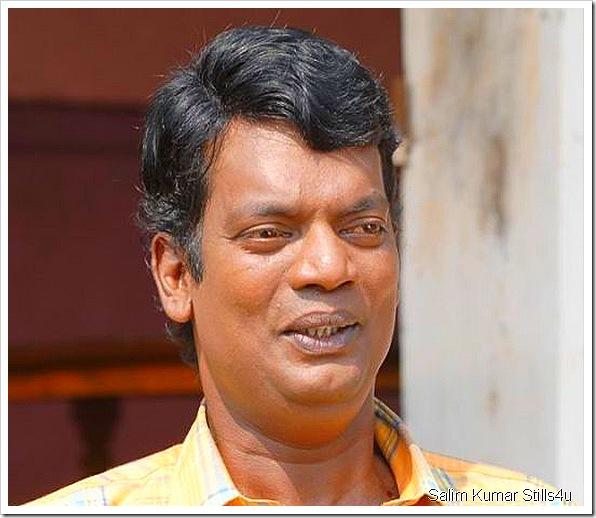 Most of the people around India may not be familiar with the Name "Salim Kumar", the only names that broke the barriers of Malayalam cinema to reach the all over the country was Mohan Lal and Mamooty, Salim Kumar's name will be addition to the list of Malayalam actors know across the country with this National Award for the best Actor Category for his Performance in the Movie Aadaminte Makan Abu( Abu Son of Aadam) which also won the national award for the Best Feature film for the year 2011. Salim Kumar shared the best actor award with Danush Tamil Actor.

Salim Kumar was born in Parvoor of Kerala in the year 1968; He done his schooling from Govt LP School, N Paravoor and later enrolled into the Govt. Boys High School, North Paravoor. Salim kUmar showed interest in Art from his child hood, he started his journey as an actor through Cochin Kalabhavan. He along with his other prominent figures of Kalahavan started the carriers as Mimicry artist later he was moved to Cochin Sagar. He won University title for Mimicry three times while he was doing his graduation (BA in Malayalam) from Maharajas College, Ernakulam.

Salim Kumar was first notice in the small screen was with his performance in a comedy programme titled Comicola in Asianet(First Malayalam Channel other than DD)It was in the year 1996. Since asianet was the only Malayalam channel at that times it was his golden opportunity to get noticed. His performance in the pregame paid off and the doors of the celluloid world opened before him with the movie Suvarna Simhaasanam, a family entertainer directed by Sidhik Shameer, BUT THE movie didn't do much good for him, he returned to his stage shows and Mimicry programmes.

But he dint faded away from Malayalam cinema, he got occasional small roles in Malayalam cinema mainly comic roles. He did 9 movies in 3 years of Hi scarier starting from 1997 to 2000. It was very few for a comedy artist like him; the real break for him came in 2000 with Thenkasipattanam directed by Rafi Micatin satrring Suresh Gopi, Lal and Dileep in the lead. The movie was bumber hit of the year, Salim Kumar dileep duo comedy scenes rocked the Theatres, and their performance played a pivot role in the success of the movie.

From then on Salim Kumar got regular roles in Malayalam movies, he as important ingredient for the success of Comic movies that released in Malayalam. His roles in Soothradharan, Ee Parakkum Thalika, One Man Show (2001), Pakalpooram (2002) were noted ones for his comic presence. The movie in which he won the hearts of Malyalees is the Lal Jose directed Meesha Madhavan , Salim Kumars role of Advocate Mukuthanunni was brief but won the hearts of all Malayalees, then followed with kalyanaramn, the comedy flick advance the mileage of Salim Kumar the comedy artist.

It was in 2003 Salim Kumar got different role from his usual ones, he done the role of Tabal Bhaskaran in Kamal Directed Gramophone. But he director who found the real talent in the man was director Lal Jose, who done Meesa Madhavan with him before came with a serious movie Achanurangatha Veedu in 2006. The title role of Samuel was done by Salim Kumar, the portrayed a father of 3 young girls, and the challenges he has to face in a society where women are subjected to sexual atrocities. Samuel in Achanurangatha Veedu won salim kumar state award for the second best actor. He was also part of national award winning Malayalam movie Pulijanmam directed by Priyanandhan. Perumazha kaalam was one of his another noted film

Salim kumar got relived from his comedy roles once or twice in his carrier of 15 years in Malayalam cinema, but he used the opportunities came his way the best, Aadaminte Makan Abu is such a movie which he used the best way, it is hi carrier best performance so far. He is among the league of Malayalam actors who won national award in the best actor category, it a glory for him that the won the award in the race against the biggies of Bollywood like Shah Rukh Khan. In the year 2011 Salim Kumar is the best actor of the country which many heroes of current cinema couldn't even dream about