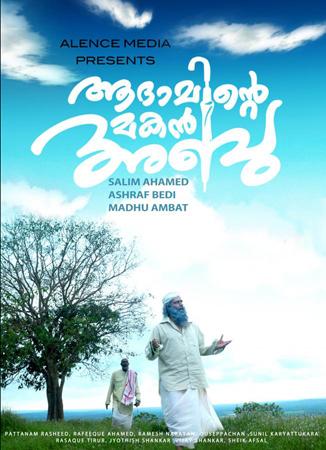 Adaminte Makan Abu is a new Malayalam film which will be released in September 2011. The film has been produced under the banner of Alence Media. The director and producer of the movie, debutante Salim Ahamed, says that the story of this film has been in his mind since almost ten years and it is only now that the dream of portraying the story to the public has come true. It is a story of a poor Keralite Muslim who passionately wishes to go for Hajj but is not able to do so because of some reasons. The best highlight of Adaminte Makan Abu is that the film has topped the list of films in the country and has bagged four awards at the National Film Awards 2010. Though this film has not been noticed well in its own Mollywood industry, it has been acknowledgement and rewarded adequately in the national level. The awards are for best film, best actor (Salim Kumar), best background music(Isaac Thomas Kottukappali) and best cinematography(Madhu Ambat). The main roles in this film have been essayed by Salim Kumar and Zareena Wahab. Being a debutante in the direction field, this recognition and fame would surely increase the confidence of Salim Ahamed as well as other newcomer directors in the field. The script, screenplay and dialogues for Adaminte Makan Abu have been written by Salim Ahamed. 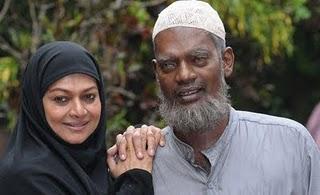 The story of Adaminte Makan Abu revolves around an aged couple who long to go to Mecca to perform the holy Hajj. The protagonist, Abu (Salim Kumar) earns his income for livelihood by selling Athar and copies of the Quran. The popular and talented actress Zareena Wahab plays the role of Abu's wife. Both the husband and wife have only one wish and nurtures a dream of going for Hajj. Zareena breeds cattles and hens and tries to make an income out of it so that the couple can fulfil their only dream. They have a son who lives in Dubai but does not help them in anyway. To make the money needed for their trip, Abu decides to cut off a huge tree standing in front of their house but only after he cuts it does he realise that the tree is not of good quality to be sold. Many other people including travel agencies are ready to help the couple by lending them the much-needed money but Abu is not willing to perform the Hajj using borrowed money. Ultimately when Abu realises that he will never be able to fulfil his dream, he begins to think about a great sin that he did long back. The sin was the cutting of the huge tree upon which many other lives were dependent. As the tree was cut off, many people in the society would have died. Abu feels that this could be a major reason why he is not able to go for Hajj. The film also deals with some environmental issues.

Director Salim Ahamed says that this story is based on real-life incidents when almost ten years back while he was working with a travel agency, he analysed how people became joyous as they were able to go for Hajj and other people's sorrow when they are not able to go for it. Other than the lead roles, there are many more people included in the cast of this film and they also portray key roles. The supporting cast for Adaminte Makan Abu are Mukesh, Kalabhavan Mani, Jagathy sreekumar, Suraj Venjaramoodu, Nedumudi Venu, Mala Arvindan, Jaffar Idukki, T.G Ravi, Ambika Mohan, Shashi Kallinga, Thambi antony, Roshni, Sreekala. Salim Kumar has done many comedy movies in Malayalam films but recently he has surprised the viewers with a delightful performance in Lal Jose's Achanurangatha Veedu. Now, Adaminte Makan Abu will have Salim Kumar playing an outright serious role and the film is expected to be a high point in Salim Kumar's career providing him with lot of scope to explore his potential. Salim Kumar says that he has put his soul into Abu's character and has lived it as if it were his own life. The music for Adaminte Makan Abu has been composed by Pandit Ramesh Narayanan and the lyrics have been penned by Rafeeq Ahmed.