Kodungallur as the capital

Kodungalloor also known earlier as Crangannore and Muziris port town was the capital of Kerala for some time during the rule of Cheran Perumals. Kodungallur was a very important trade center in Kerala with contacts of outside world for trade and business. This center known at that as Muziris port was the major port in Kerala coast. This was the gateway of Kerala for the Muslims, Judaism (Jews) and Christians. The Kodungallur town is at the North end of the sacred Periyar River. The town is about 50 km from Kochi. Kodungallur is primarily an important Hindu pilgrim center of Kerala. It is the place of the famous goddess Durga in the form of Kaali worshiped by thousands of Hindus.

India's first Juma Masjid (Friday mass prayer place) is believed to be built in 629 AD on behalf of one of the Cheran Rulers of Kerala. The Cheraman Juma Masjid was built by Malik bin Dinar who was one of the 13 followers of the Prophet Mohammed. This mosque in Kodungalloor resembles a Hindu temple in appearance. It was earlier made of wood. Built in 629 A.D., this is the first mosque in India where Juma prayers were started. Some changes were made on many occasions and it now has concrete minarets (pillar like structures). The interiors are still wooden. The Masjid has a Kerala oil lamp right in the center. This lamp is of great significance to people of all religions. They bring oil for the lamp on the auspicious occasion of major family events as their offerings.

The Peculiarities of the Cheraman Mosque 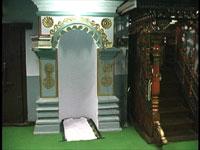 1. As mentioned the main feature is the look of a Hindu temple though it is a mosque.
2. Another specialty is the Kerala type Oil Lamp which always burn in the center of the Mosque.
3. One more specialty is that Cheraman Juma Masjid is the 2nd oldest Mosque in the entire world. The first Juma Masjid of the world is that of the Madinah (Medina) of the Prophet Mohammad Nabi. This first mosque is also the Memorial Tomb of the Prophet.
4. The Cheraman Masjid is built during the life time of the Prophet himself – the Prophet has lived during the years from 570 to 634 A.D.
5. The chief priest of the Masjid gives Friday sermons from a wooden place made of rose wood with carvings like that of temples.
6. Cheraman Masjid was built much before the Muslims came to India
via the Himalayan passes through Turkey etc creating destruction and havoc to the life and property of the people of the area. Even now there are ugly incidents in the North between the Muslim and Hindus. But in the coastal area of Kerala especially around Kodungalloor there never were any conflicts. People used to come for trade and were trading only. The conversions were all purely voluntary. People of North can learn a few things as to how to live harmoniously with people of different religions or communities if they visit and observe people of Kodungalloor. There are Dutch, Portuguese, Jewish, Muslim, Christians and Hindus living with perfect peace.

Legend about the 1st Mosque of India

A legend about the Cheraman Juma Masjid is that this is built on behalf of the famous King Cheraman Perumal Bhaskara Ravi Varma (Some say it is Rama Varma Kulasekhara). The belief is that the ruler had a dream vision that the moon is split into two. He wanted to know about the same and called the famous astrologers of that time. He was not convinced by the explanation given by them. He was restless and troubled by not getting a convincing explanation. At that time a group of Muslim traders came to the then Ceylon for trade. They heard the story of the king of Kerala and gave an explanation that the observed splitting of the moon, was the celebrated miracle of the Holy Prophet Mohammad Rasoolullah at Makkah (Mecca) who had just founded the Islam Religion. On further inquiry he was informed that this was a symbol of the coming of a Messenger of God from Arabia. He then appointed his nephew as regent and set out to meet the messenger of the god. According to some historians the Perumal met the prophet at Mecca and was influenced by him and converted to Islam religion. He then changed his name to Tajuddin. But there are others who believe that he called himself as Abdullah Samudri. Some other historians feel that it is not that famous Cheraman Perumal Bhaskara Ravi Varma, but another ruler (Rama Varma Kulashekhara or someone else) of the Cheraman Perumal dynasty. All the rulers of the Cheran dynasty were known by the title Cheraman Perumal followed by the maiden name. The love for Holy Prophet grew in the heart of the concerned Cheraman Perumal and he became the earliest Muslim convert of present day India. He was one of the direct converts under the Prophet himself. The Cheraman Perumal died on his way back to Kerala in port of Zafar, Yemen. It is believed that a tomb for the 'Indian king'. It used to be visited for many centuries by many Muslim faithfuls. Before his death he had written letters to be reached to his successors. One such letter was for his nephew who was the ruler of the time to build a Mosque and help him to propagate. It is the belief that the followers of the Perumal who was with him during the journey and were converts, along with one of the 13 followers of the Prophet, returned built the Mosque. The Cheraman Juma Masjid was built by Malik bin Dinar who was one of the 13 original followers of Mohammed Nabi.

Other Places of Interest around Cheraman Mosque


• Kodungalloor Bhagavathi (Bhadrakali) Temple is very famous in Kerala and The Bharani festival attracts thousands of devotees annually.
• Thiruvanchikulam Temple of Sri Mahadeva is one of the oldest Siva temples of Kerala also of South India. This temple has the Siva with his entire family which is very rare. It is said that his temple has some connection with the Chidambaram temple of Tamilnad. One of the important events of this temple is the annual aanayottam (elephant race).
• Sree Rajagopala Krishna swamy Temple with Rugmini and Sathyabhama, Kodungallor. This temple is of the Gouda Saraswath Brahmins community of Karnataka settled here.
• Edavilangu sivakrishnapuram Temple – Lords Siva and Sri Krishna are the main deities of this temple.
• St. Thomas Church: Christ's apostle St Thomas is believed to have landed in Kodungalloor (formerly called Muziris) in 52 AD. It has ancient relics.
• The oldest synagogue in India. The Jewish community here built this in 1586 AD.
• The ancient Portuguese fort also known as the Crangannore (Kodungallur) Fort built in 1523. This was captured by the Dutch in 1661 and later Tipu took possession of the same and hence it is also known as the Tipu Sultan's fort. It is in a ruined condition.
• Portuguese Mar Thoma Church
• Cheramanparambu
• Chirakkal Kovilakam (Palace) of the Kodungallur Royal family. There is also a Puthan Kovilakam.

Kodungalloor is in Thrissur District.
It can be approached by:
Road – The coastal highway N H 17 from Cochin to Mumbai passes through the town. KSRTC buses and private buses re available from and to Kochi, Thrissur, Guruvayoor, Iringalakuda, Chalakudy, Mala, Paravoor, Calicut, Kottyam, Pala, Kannur, Kasargod and Sultan Batteri etc.
Railway facility: Nearest railway station is Iringalakuda with only few trains topping 22 km. Aluva is a station with most of the trains stopping.
Air ravel: Nearest airport is Nedumbassery cochin International Airport 35 km away.
Water ways connections: Kollam Kotapuram National waterway ends at Kodungalloor.

Since publishing the article I came across some special features about the Juma Masjid of Kodungallur. One specialty is that a slab of marble from Mecca and fixed inside the Mosque. Another rare phenomenon is that in this Mosque Vidyarambam is done by the non Muslim devotees to their children on the Vijayadasami day as in case of Hindu children in Hindu temples.

One thing to be noted in the conversion to Islam religion is the force, violence, destruction and loot in most of the parts in India. But the conversion of the Cheraman Perumal is only on the basis of conviction of ideas and voluntary. The Perumal was a powerful force internationally having trade and business relations with several European and Arab countries. There was no physical compulsion for him to convert. The whole affair was so smooth and his way of propagating the religion was smooth. Probably at that time the Prophet himself was present and those responsible for propagation were direct disciples who had the opportunity of understanding the essence of the religion directly, without any corruption by the intermediaries, from the Prophet himself.