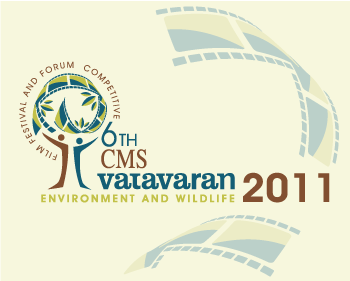 The sixth edition of the CMS Vatavaran Film Festival will be held at New Delhi, the capital of India from 6 December 2011- 10 December 2011. There will be eight films on environment that will be competing in this film festival. The jury consisting of 37 members is headed by Abid Hussain(scholar & diplomat). So far they have nominated 68 films (51 Indian & 17 international films) for the film festival. The Vatavaran film festival has more than 300 film entries from India & 27 countries. The films from Kerala state include
1.The fall of Jatayu(English)
2.Kaippad- the backwater paddy & fish field(Malayalam)
3.The bird catcher(Chithira Kuzhal)(Malayalam)
4.Shelter(Malayalam)
5.Home-our garden of Eden(English)
6.Vrischikathile Aalmaram(Wind in the Banyan Tree)(Malayalam)
7.A pestering journey(Punjabi, Hindi, Tulu, English, Malayalam)
8.My home is green(non-verbal)

Among the above mentioned films, The fall of Jatayu is directed by Kyrikos Stylianopoulos & Siddharth M. P. This film is in English & will tell you how the vulture king described in Ramayana & his kind have once again, dealt a cruel blow. Actually this film is a journey through culture, belief & struggle of a few dedicated scientists in their attempts to save a dying species. Kaippad- the backwater paddy & fish field is a Malayalam language film directed by Babu Kambrath. This film gives you an idea regarding the relationships & ecological changes between the environment & people through different seasons. The bird catcher (chithira kuzhal) is a film in Malayalam language directed by Majeed Gulistan. Here the film narrates the story of how 3 children finds them in the forest.

Shelter is a Malayalam language film directed by Raghu Gopalan & it highlights how the greed of a man for materialistic comforts is destroying our natural world. Home- our garden of Eden is an English film directed by Suresh Elamon. This film tells about the nature's wonders in the backyard of our houses. Wind in the banyan tree (Vrischikathile Aalmaram) is a film directed in Malayalam language by Chitra V.S, Romy Victoria, Swathi M. S, Athira I. B, Aswathi M, Kavya M & Anjali P. M. This film gives you a message of spiritual relationship between the nature & human beings. This is an adaptation of the oak tree of autumn (Russian short story) by Yuri Nagibin. A pestering journey is a film in English, Tulu, Hindi, Punjabi & Malayalam languages directed by K. R. Manoj. It should be noted that this film deals with 2 pesticide tragedies in our country & their impact on society. My home is green directed by Sajan Sindhu uses a caterpillar & an ant to show the impact of pesticide abuse.

Kerala state with 8 nominations is behind Delhi with 21 nominations. The film festival will be held at the convention centre that is opposite to the Jantar Mantar in New Delhi. The winners will be announced at a ceremony on 9 December 2011 that will be held at New Delhi. The importance of this film festival is that here the films will be competing for the CMS Vatavaran awards & cash prize of Rs 15 lakhs. Also note that Vatavaran festival 2011 has biodiversity conservation as the theme to highlight our country as the venue for the CBD (convention on biological diversity) 11th conference of parties in 2012 October.