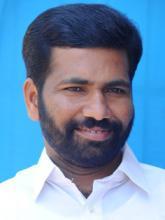 and James Mathew were withdrawn by the Ruling UDF after examination of the Video footage of the incident that took place today morning in the Kerala Niyamasbha. Deputy speaker Sri Saksthan officially announced that there was no evidence proving TV Rajesh assaulting the lady guard in the footage available. It was evident from the clips that the MLA was far away from the lady guard while the incident took place.

After the inspection of video footages the LDF MLA's TV Rajesh talked to the media, James Mathew MLA, declared the standoff LDF over the issue, he strongly defended TV Rajesh and Himself. Whet h media quizzed T.V Rajesh; he literally broke down, expressing his grief over the accusation of PC George. He even offered to quit the post if he proved to be guilty.

Eelier in the morning LDF MLA's started to protest over the action to be taken over DySP Radakrishnapillai . In response to the opposition protest the ruling party MLA's also started to protest in the house, the struggle between the two sides brought the guards in action. Later Govt Chief Whip PC George accused T V Rajesh of assaulting the lady guard.