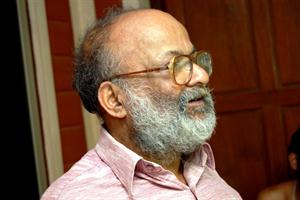 Renowned poet and lyricist Mullanezhi (63) passed away at 3.30 in the morning of Saturday. He have been admitted in a private hospital in Thrissur since Friday night after cardiac arrest. Mullanezhi Neelakandan, called Mullanezhi, was born in Ollur Avanasseri Mullanezhi Mana of Thrissur.

He started is career as a teacher in Ramavarmapuram Government High School and worked for a long time. He was also a member of Kerala Sangeeth Nadaka Academy from 1980 to 1983. He entered the art scene through a drama called 'Chaverppada', penned by PM Abdul Azeez in early 70s, in which he acted with Premji.

He has written lyrics of more than 60 songs for about 25 films including Narendran Makan Jayakanthan Vaka, Vellam, Piravi, Yathi Bhangam, Njan Onnu Parayatte, Swarnapakshikal, Kazhakam, Njaval Pazham, Chora Chuvanna Chora, Amruthageetham and Kaattile Paattu. He last wrote for the latest movie, Indian Rupee, directed by Ranjith. He won the Kerala State Award for best lyricist in 1981 for the film 'Njaval Pazham'. He recieved Kerala Sahithya Akademi Award in 1995 and 2010 and Ulloor Award in 1977.. Mullanezhi has also appeared in films Uppu, Piravi, Kazhakam and Neelathamara.

The funeral will take place at 5.30 on Saturday evening at his home premises in Avanasseri.

Mullanezhi's untimely departure is a great loss to Malayalam cinema, literature and in general to the cultural arena of yhis State. He was to attend a workshop at Kannur yesterday, organized Kerala Sastra Sahitya Parishat, to formulate the themes and art forms for the 'Kala Jatha' of Parishat.His contributions to such art forms will always be remembered by everybody, especially those connected with the Total Literacy campaigns in 1989 and 1990.

Yes, his death has caused a huge loss to the Malayalam literature and cultural arena. He gave us beautiful poems and songs to entertain in memory. Even his latest song from Indian Rupee is superb.