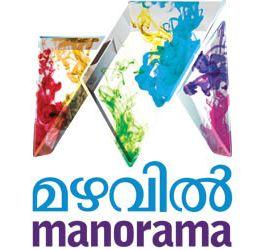 Malayala Manoram is going to strengthen their television operation with the launch of Mazhavil Manorama in Malayalam Language. Mazhavil, which means rainbow, will now adds more colour to Manorama Group's diverse interest in regional dailies, radio channel, news channel, magazines and online news. Mazhavil Manorama is a complete entertainment channel in Malayalam. They informed that the official launching of Mazhavil Manorama will be on October 31st. The launching of Manorama's new channel will create a tough competition for Sun Network's (Surya and Kiran), Asianet Network and Kairali channels.

Malayala Manoram is not new to malayalis. After dominating the print Media for a long time, they made their presence in television channel by launching Manorama News. Within weeks, manorama News turned to be one of the most viewers Malayalam news channel in Kerala. Their Online Channel 'manorama online' is also a well known prominent online website in India with up to date news and entertainments. Now they are stepping forward to entertainment section. Same as other, they are planning to make Mazhavil Manorama as the best Malayalam entertainment channel

The logo for Mazhavil Manorama is somewhat same as Manorama news, denoting a 'M' which carries all the colours of rainbow. According to the sources, Mazhavil Manorama plans to come out with a reality show in a different plateform. So we have to wait and see how they are going to execute it. They are also showing one musical reality show named Josco Indian Voice Music Show. There are 25 Young Singers Participating in Josco Indian Voice Music Show Including a Pakistani Singer. Shankar Mahadevan, Sujatha and Sreenivas are the Judges of Josco Indian Voice Music Show With Stephen Devasy. Also they have planned to show some serials from prominent crew in Malayalam serial industry. They are also going to take copy right to shoe fresh movies in this channel. Earlier it was told that the channel will make its official launch during onam days. But now Malayalis don't have to wait any more for this entertainment channel. It will come into our life from 31st of October onwards.