Keeping the government activities live, Kerala CM has taken a foot step forward to solve the grievances of the common people. The Kerala CM's Mass Contact Programme which is being conducted in 14 districts of Kerala is getting huge response as the people rush in to the pandhal to have a glance of their most respected leader. The pandhals which are being built in each district are fully packed with local residents who have even come from far places to reach their grievances. The main aim behind the programme is to reduce the distance between the Government and people brining growth and development. Kerala Chief Minster Mr. Oommen Chandy aims at resolving the problems of hundreds of people who are denied justice because of the technical errors. 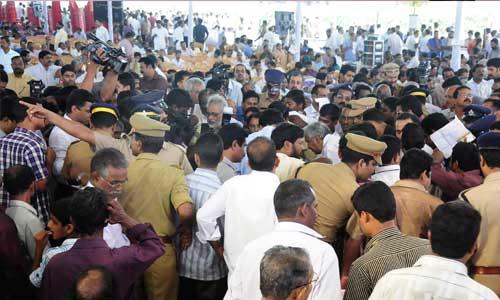 The Mass Contact Programme which carries a message, finding a solution for the grievances of the people. Around 35 -70 counters were opened in various districts which had been set up to guide the people who had come up with their complaints. This unique programme with a human touch has really given life to many who were really spending pathetic life. Some of the financial assistance given out in the programme includes for Ansar and Khalid from Aluva(Rs 25,000), Rs 2 Lakh to Mr M.V. Sabu(his daughter Sandra was killed in an school bus accident), Rs 1 crore financial aid in Kozhikkode, Alukanniyil Shameem from Ernakulam( Rs 50,000), Rs 1 Lakh to Rasney for cancer treatment.

Mean while the state government plans to provide the BPL cards to all the deserving people as the steps to speed up the process would start just after the Mass Contact Programme in all districts.

We can hope that this high ambitious programme would give an insight for the government to take positive steps to bring changes in the system.