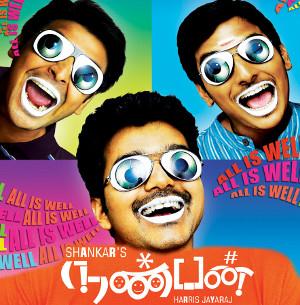 After the blockbuster film Velayudham, the Tamil star Ilayadalapathy Vijay is all set to rock the fans with his new flick Nanban (Friend). He is teaming up with the hitmaker Shankar and young stars Srikanth and Jeeva.

Nanban is the Tamil remake of the 2009 Bollywood blockbuster Three Idiots directed by Rajkumar Hirani. The movie starring Aamir Khan, R Madhavan, Sharman Joshi and Kareena Kapoor rewrote the box office records prevailing till then. The film was a loose adaptation of the best selling novel Five Point Someone penned by Chethan Bhagat.

After the mammoth budget movie Endhiran starring Rajanikanth, Shankar is coming back to action. If it was Dalapathy in the former one, now he is pairing up with the Ilaya Dalapathy of Tamil cinema. Shankar is taking a deviation from his usual film track as well. The film will also be dubbed into Telugu as Snehitudu.

Nanban is coming after a long term of anticipation. The project was finalised only after going through many speculations and confusions.

The movie tells the story of 3 engineering college friends named Panchavan Parivendan (Pari), Sevalkodi Senthil and Venkatramakrishnan. These roles are played by Vijay, Jeeva and Srikanth respectively. The three students have as much different characters. One study because of the love to the subject, another for the sake of his parents' wishes and the final one to get his family out of poverty. The incidents happening in their career and life are portrayed with the accompaniment of comedy.

Ileana D'cruz is the heroine of the film. She is the highest paid actress in South India. She is reprising the role of Kareena Kapoor in 3 Idiots. Sathyaraj plays the role of the College principal played by Boman Irani in Hindi original. The actor-director SJ Surya is making a special appearance in the film.

The film casting was completed after many complications. Surya was supposed to do the lead role. But due to clash of the dates, he pulled out and Vijay was casted. Initially Madhavan was approached to reprise his role but he declined. Later Srikanth was chosen. Sharman Joshi's role was given to Silambarasan. But as he could not reflect the character much, Jeeva replaced him. The female lead was supposed to be done by Asin or Shruthi Hasan. Even Katrina Kaif was approached. Eventually Ileana got the chance. Anuya Bhagavat, Sathyan, Raghava Lawrence, Vijay Vasanth, Manobala and Uma Padmanabhan are playing other important characters. Malayalam comedian Indrans also plays a noted role.

The shooting was completed in 8 months. Ooty, Chennai, Dehradun and London were main locations. The music section of the film has been handled by Harris Jayaraj. Shankar's usual partner AR Rahman could not co-operate due to busy schedule. Harris Jayaraj has earlier worked with Shankar in superhit film Anniyan. One of the song in Nanban includes lyrics in 16 languages.

Nanban is all set to hit the theatres on 12th January. The Telugu version, Snehitudu, will get released on 26 January. Nanban is one of the most awaited films of the year, especially while Shankar is deviating from his usual track. Let us hope for a mega hit from the team.