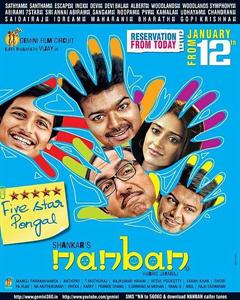 I am really a crazy fan of Vijay and had never missed a movie of him. 'Elayadalapathy' Vijay is one the South Indian actor who sinks the theatres in to a 'World of Entertainment'. He is not only the most popular actor in Tamil Nadu, but also has a long tail of fan followers in Kerala too. Even I have experienced how this great actor can bring supporters and fans queuing up for hours to get in to the theatres. It's very less seen in the whole movie industry a person with great charisma can pull viewers to theatres. Through out his movie carrier Vijay has made many of movies go on rocking the theatres while most of his movies had succeeded in box office.

Vijay is a blend of talent packed with consistency and hard work which makes him the most successful actor in South India. Vijay has become a house hold name while the people of Kerala have always given positive response to all of his movies released here. After the elite success of Thulladhe Manamum Thullaum, Kushi, Priyamaanavale, Thirumalai, Ghilli, Sachein, Pokkiri, Vettaikaaran, Kavalan and Velayudham which really cracked all box office records Vijay teaming up with Shakar is coming to enthrall the audience with the latest flick "Nanban'. Already the movie has been voted as the most anticipated movie in 2012. The movie is a remake of the Bollywood blockbuster 3 Idiots.

The story of the movie has been adapted from Chetan Bhagat's novel 'Five Point Someone'. Vijay, Jeeva and Srikanth will play the leading characters in the movie while Illeana D'Cruz heats up in the female character role. Shankar, the mesmeric director who is has a magical skill to turn all his movie to blockbuster hits surely will not disappoint the fans with Nanban(Friend). The movie will be having an excited opening in the theatres as it is reported that tickets for the first four days have been sold out. The movie Nanban would too be released on 12th January 2012 in Kerala in most of the prominent theatres. The movie was shot in various locations at Ooty, Dehradun and Chennai. Two songs for the movie feature the beauty of London and Buckingham. The exciting climax scenes shot at various locations in Europe and Andamans will add more flavour the beauty of the movie.

So catch the real excitement in theatres near you. Vijay would be having a flying 2012 with Nanban as the movie would add a feather too in his cap to gather more success in the upcoming movies too.

Vijay’s Nanban movie review and the first day reports from theatres in Kerala are given here. Nanban released in Tamil Nadu and Kerala on 12th January 2012. When Shankar teams with Vijay for movie it would be some thing special, so do with the movie Nanban. The movie had a fantastic opening in Kerala with the first show going house full in all released theatres. Read the review of the movie.