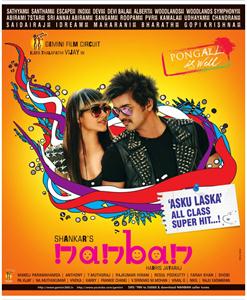 The first show of Nanban, the most anticipated movie of 2012 got released in Kerala on 12th January as theatres were thick packed with movie lovers. The movie directed by S. Shankar in a gigantic budget had a good opening in around 60 plus theatres in Kerala. As per reports from metros in Kerala, all the theatres which run the movie were flooded with movie lovers standing for hours in front of the theatres from early morning itself. The movie is a remake of Bollywood ever green blockbuster '3 Idiots'. Illayathapalathy Vijay, Jeeva and Srikanth played the leading characters which Ileana D'Cruz and Sathyaraj joined the team giving more colours to the movie.

Shankar's Nanban which is a remake of '3 Idiots' is all about Panjavan Pari Velan(Vijay) an engineering student and his friends. Pari(Vijay) who is a fresher to the engineering college gave a pleasant surprise to his seniors who tried to greet him on day one. Pari gets the accompany of Senthil(Jeeva) and Venkat Ramakrishnan(Srikanth) in the hostel who becomes close friends. Virumaandi Sandhanam(Sathyaraj) nick named as Virus who is the principal of the college is a strict person who believes in self discipline and tries to implement the same with his students. Pari(Vijay) a cool guy has his own style of character and doesn't like others interference in his freedom. Srivatsan(Sathyan)nicknamed as Silencer keeps himself away from others.

Senthil is a funny guy who comes from a poor family while Venkat who was really passionate towards Photography keeps away his interest and joined the college to make his parents happy. The three attends a marriage function where Pari meets Anariya(Ileana) the daughter of Virus. Anariya who was engaged earlier had fallen in love with Pari. The second half goes on to an exciting mode with lot of twist while the viewers get answer to the question - Will Pari(Vijay) marry Anariya(IIleana)?

The movie is a pure entertainer as the audience goes through unpredicted shots every moment in the progress of the story. Vijay, has again proved to the real hero giving his best ever performance who is being truly supported by Jeeva and Srikanth. There are too many unforgettable scenes which you can keep close to heart. IIena keeps the movie on true mode keeping her presence stern in the Kollywood. Sathayraj as Principal virus is awesome and great with his character. Sathayan as Silencer stays good in molding the story of the movie. Shankar as a director had a well study over the original one had tried his best to make the movie the best entertainer of the year. The visuals of the movie seem great accompanied by the trendy music by Harris Jayaraj. The whole team behind the movie needs a standing applause of their maximum effort putting in to bring their best. So concluding the movie will surely rock the theatres and will run for weeks fully packed. Enjoy this pongal with your family and watch on Shankar's visual treat in front of you.

Vijay’s Nanban, the most anticipated and awaited movie of 2012 is getting ready for release in theatres this Pongal as fans are already on the top of the sky really in a mode of excitement. The movie will be released in Tamil Nadu and Kerala while the dubbed version of the movie will be released in Telugu named ‘Snehitudu’. Get more details about the entertainer of the year ‘Nanban’.

Watch 3 Tamil movie audio releases launch function on Surya TV or check those websites which live stream Surya TV online. The audio release function of Danush 3 tamil movie will be telecast on Surya TV on 22nd Janaury 2012 at 1.15 PM. This would be a spectacular event to watch dhanush singing ‘Why This Kolaveri Di’ song in front of hundreds of fans gathered there.