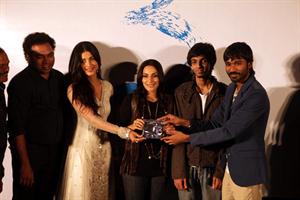 Dhanush's upcoming tamil movie 3 directed by his wife Aishwarya had made a histortcial beginning with the only song 'Why This Kolaveri Di' which had become a global hit. The movie which is planned to release on 3rd February 2012 is one of the most expected movie in 2012. 'Why This Kolaveri Di', the most popular song which had become a viral hit is still on the lips of millions who love to watch the video again and again. Dhanush who had written the lyrics and even sung the song might not have expected this huge support from people world wide. Anirudh Ravichander, and young musician who has become much popular with this song had tried his best to set the tunes for the movie. Anirudh is a relative of Aishwarya who had given a real break to the young musician through this movie.

The single track of 'Why This Kolaveri Di' was posted in Youtube on 16th November 2011 had gone viral which had attracted 20 million views in one month, while Youtube had given a recognition to the video tagging as ' Recently most popular(Gold) video'. Actually the song 'Why This Kolaveri Di' gave motivation to many others to bring their own version of the song. It is also reported that a Nepali version of the song will be soon released. 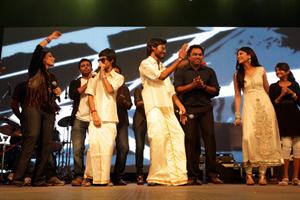 The soundtracks of the movie got released on 23rd December 2011 at St.George's School, Chennai. The audio was released in a grand function which was attended by invited celebrities. Dhanush himself had performed the song on stage which mesmerized the large audience present on the occasion. Sun TV which had bought the telecasting rights of the audio launch at a huge price.

Surya TV malayalam channel which a part of Sun Networks is telecasting the audio release function of Dhanush's upcoming tamil movie 3. The telecast will be on 22nd January 2012 from 1.15 PM. So tune in to Surya TV and don't watch this mega event.

Why This Kolaveri Di malayalam version video and lyrics

Why This Kolaveri Di Malayalam Version Video and Lyrics is added here. Get the lyrics of Malayalam version of the famous song Kolaveri di by Dhanush and team. Enjoy the song Why dis Kolachadi di by mallus. The instruments used in this song is nadaswaram, shehnai, saxophone, urumee and thavil drums, acoustic guitar and keyboards mixed with electronic synths which made in a genre bending song.

Vijay’s Nanban, the most anticipated and awaited movie of 2012 is getting ready for release in theatres this Pongal as fans are already on the top of the sky really in a mode of excitement. The movie will be released in Tamil Nadu and Kerala while the dubbed version of the movie will be released in Telugu named ‘Snehitudu’. Get more details about the entertainer of the year ‘Nanban’.