The holy river of Pampa is considered as the Dakshina Ganga (Ganges of the South) because of its association with the Sabarimala Ayyappa Temple on its bank where millions of devotees/pilgrims take bath to purify them before going to the Temple to offer worship to Lord Ayyappa. It is considered as a holy river also due to the association with Sri Rama, Mathanga Maharishi and other divine personalities as per some legends. The origin place of the river is Pulachimalai hill in the Peerumedu plateau of the Western Ghats section at a height of about 5000 feet. It is the third longest river of Kerala. The river flows westward though the Taluks of Ranni, Ayroor, Pathanamthitta, Kozhanchery, Chengannur, Kuttanad (rice bowl of Kerala) and Ambalapuzha of the Pathanamthitta and Alapuzha districts of Kerala State before joining the Vembanadu Kayal (Vembanadu back water lake). 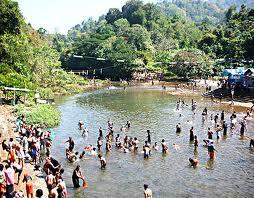 Taking bath in this river is considered to absolve one of his/her sins. In the olden days the holy and spiritual personalities and the Devas used to take bath in this river making it a holy river. The river banks on either side are supposed to have the presence of the Devas in the form of the trees and the devis in the form of the creepers. It is in the midst of the evergreen rain forest with the beautiful greenery and flora and fauna. The Sabari Peettha where the Sabarimala temple is situated and the Bhasma kulam (ash pond) are at the foot of the Risyamookadri. The river is blessed by the Lord Ayyappa, Sri Rama, hundreds of Maharishis including the Mathanga Maharishi by their having bathed in the same. The person who takes bath in such a great river will get rid of his diseases and his sins. The devotees who go to Sabarimala take bath here and climb to the Sabari temple through the 18 steps. The first thing the devotee see is the board 'Thathwamasi' meaning that is you. The devotee who goes there once will have the urge to go again and again to have darsan of the Lord Ayyappa. Some devotees visit the shrine 4 to 5 times a year.

There is a festival of flowing the Pampa vilakiu (lighted torches on wooden frames) in the river. On the previous day of the Makaravilakku festival at the Sabarimala Temple, the Pampa deepam festival is observed. For this a special type of square frames fixed one above the other up to 7 tiers in a pyramidal form. On these frames the wood cut into round shaped sticks are stuck. The other end of the stick will have the cotton cloth thickly wrapped to make huge wicks. On these wicks oil will be poured. Then these wicks are lighted. All the wicks will be lighted and this wooden (or of plantain stems)form with the lighted wicks will be kept in the river water. It flows in the river with its reflection in the water making it a beautiful sight to behold. Now of curse after the Idukki dam the water flow is very less and controlled and hence this festival is done only symbolically. The devotees see this and go to the Sabarimala temple to have the darsan of the Lord at the Makara Samkrama.

Sabari was a queen in her earlier birth. She was a kind hearted lady with helping mentality. She used to offer all comforts to the saadhus and sanyasees using her riches. She felt that without the involvement of the physical activity the service by her riches is not worthwhile. She went to Prayag where she met several holy persons and offered them whatever help she could give. She made penance to be born as an ordinary human being in her next birth so as to serve the great saints not with money but her doing the physical work. During the penance she died. She was born next as a tribal girl dwelling in the forest. When she grew up her father arranged for her marriage and brought animals to be killed for the feast. Sabari did not like the killing of the animals for her sake and she ran away from her house and reached the banks of the Pampa River near the Ashram of the Mathanga Muni. Here she wanted to serve the great saints without anybody noticing her. For this she used to hide on the tree branches. In the night without anybody's notice she will clean the paths which were used by the Maharishis and arrange whatever may be required by the Maharishis (Munees) without their being aware as to who is doing the service. Her belief was that whatever service one is doing should be done without others being aware of the same. One day Mathanga Muni saw her while she was doing the service and asked as to who she was. She informed him that she was the daughter of a hunter and is from the hunter community.

The Maharishi told her that though she is from a low caste, is a person of very high standard and she can stay in his Ashram. When she started staying with him other munees started abusing him and her for her low cast birth and did not allow her to do any service for them. When Mathanga Muni was about to die he said that his time is up and she need not worry. He taught her the Rama mantra (chanting about Lord Srirama) and asked her to do the chanting for the rest of her life. He also told her that the Lord Sri Ram will visit her when she will achieve salvation. After the Maharishi's death Sabari did as she was told to wait for Sri Rama to come. Finally Sri Ram came to her house. She was very much excited. She offered him and Lakshmana seats and offered them fruits she used to gather in the mornings to be given to them when they come. When they did not come she will eat the fruits at night and continue the routine the next day and so on. She was biting each of the fruit to make sure that Sri Rama did not have to eat any unripe fruit and only sweet ones are given to him. From the normal person's view this may be an impure and polluted offering as she tasted them first. But her intention behind the action was pure and with service motive and the Lord was very much impressed with her. He did not bother about her biting the fruits. He ate them with relish. After taking the fruits offered by Sabari Sri Rama informed her that he was very happy with her services and she can ask anything she wants. She wanted that he should make the Pampa Rive pure. The river became impure when a Rishi kicked her with his leg. Sri Rama blessed her and also blessed the Pampa River to become pure and the river became pure again. Then he asked her to go and have bath in the river. After her bath Sri Rama lead her to the shore and she died looking at Srirama and got salvation from life (entered the realm of eternal bliss – merging of the atman and the Paramatman).

The place where prince Manikantan of Pandalam Palace (later he became to be known as Ayyappan an incarnation of the Sri Dharma Sastha) selected for his penance was named after the Sabari for the selfless services she had rendered to the great sages of the area.