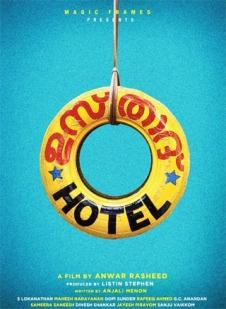 After a break of two years, new generation director Anwar Rasheed is coming with his latest flick titled Ustad Hotel. The Bridge, one of the 10 films of the anthology Kerala Cafe, was the last film from him. It was a completely different one from his previous works and he got much appreciation for the movie as well.
In Ustad Hotel, Anwar Rasheed is teaming up with the son of Megastar Mammootty, Dulqur Salman. Dulqur has already found a firm place in cinema with his debut film Second Show. Hence, the audience is expecting a good movie from the team.

Ustad Hotel is an emotional thriller that is slated to follow the new wave trend in Malayalam cinema. It narrates the story of the relationship between a young man and his grandfather in the backdrop of an old hotel at Kozhikode beach. Director Anjali Menon has scripted the film. She says the plot came to her mind at a lunch time while working on Kerala Cafe. Dulqur Salman and veteran actor Thilakan are playing the grandson-grandfather duo. This will be another strong character of Thilakan after that in Indian Rupee by Ranjith.

Nithya Menon is the female lead of the movie. Nithya is fresh of a hit with Talsamayam Oru Penkutty. Bhagath Manuel, Lena, Aaryan, Siddique and Mamukkoya are playing other important characters.

Lokanathan handles the camera and Mahesh Narayanan is the Editor. Gopisundar is the music composer for the movie. Ustad Hotel is produced by Listin Stephen under the banner of Magic Frames. The movie will hit the theatres in mid-May.

Usthad Hotel malayalam movie- Dulquar Salman back on the screen

Usthad hotel is an upcoming malayalam movie from the friend of hit films Anwar Rasheed. Mammooty’s son Dulquar Salman plays the leading role in this film and the Nithya Menon plays the role of heroine. The film mainly deals the story of a hotel popularly known as Usthad hotel and also the relationship strength between grand father and grand son. Listin Stephen produced this film under the banner magic frames.

Usthad Hotel malayalam movie review and first day reports(FDFS theatre responses) are given here. Much awaited Dulquer Salmans's movie Usthad hotel has arrived in theaters. Can Dulquer able to jump from the shadow of his father? Read Spiderkerala exclusive review on the movie and get decide to book a seat at a near by theatre.