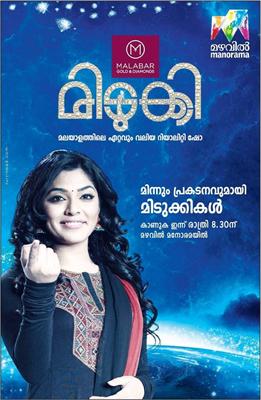 Reality shows are now common in malayalam television channels. After the success of a bunch of programs exclusively for finding young talents in acting, music and dancing, channels are ready to heat their brain thinking of innovative ways to keep the audience intact. After keeping the competitive spirit of the participants and audience alive, Mazhavil Manorama is gearing up to entertain millions of its viewers with a new reality show 'Midukki' which has already started telecasting in the channel.

Anchored by Actress Rima Kallinkal, as claimed by the channel, this programme would be the biggest of all reality shows. Malabar Gold and diamonds is the prime sponsor of this show. Midukki will replace 'Veruthe Alla Bharya' and will be aired every Friday, Saturday and Sunday at 8.30 PM. From more than 1000 applications, 20 contestants had been finally screened to make an entry into the unique platform of 'Midukki', which would give an exposure for young malayalee girls to showcase their talents which are a combination of personality and beauty contest.

This show has a panel of judges who are specialized in their own field. Ambika, Dr.Piyush, Dr.Saileshya & Shalini. There are 20 girls participating in this competition are the permanent judges who will keep the show alive with their presence and making the contestants to speak out according to given situations.

The man behind 'Midukki' would be none other than Satheesh Kumar who had proved his mettle creating ideas which gave birth to various programmes. 'Tharikida' on Surya TV, 'Superstar' on Amrita TV and 'Veruthae Alla Bharya' on Mazhavil Manorama came out of the thoughts of Satheesh who finds his place as producer for 'Midukki', a reality show to find 'Kerala's smartest woman'.

'Midduki' has been well designed in such a format which would judge the personality of the participants added to it a blend of fashion too. The selected panel of judges which consists of psychologists and other experts would deliver tasks for each contestant which would also be a brain exercise for them. Rima Kallinkal, the backbone of the show is a person with strong individuality and has proved to be fit for the show from the primary episode onwards.

So don't forget to tune into Mazhavil Manoramma as watch 'Midukki' which will surely entertain you at its best.