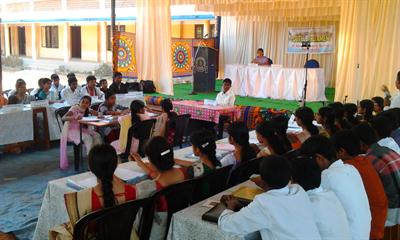 The excitement of enacting as Ministers of Youth Parliament still rolls around the face of students of St.Mary's Public School Puthupally as the day made their dream come true. Blessed with the presence of Fr. Joseph Mathew (School Manager) and Mrs. Mariamma. TC (Principal), refurbishing the functions of the Indian Parliament, 'Youth Parliament' turned to be a memorable event for the students who kept the spirit of procedures alive. Held for the first time in the history of the school, it was a day which brought the students together for a real-time show which they haven't experienced in their life.

"A team of students who had proved their mettle through discussions, debates and other class room activities were called for a two week training including discussion and debates on hot topics", says the programme coordinator Mr. Biju Cherian. "Under my guidance and other teachs, students had to demonstrate their skill on stage with their tongue".

With a tight plan focusing on exact procedures followed in the parliament, students were highly aggravated to change themselves into various reputed positions including that of Hon. President, Hon. Speaker, Ministers and MP's", shares Biju who serves as a Social Science teacher in the school.

"The training period was truly a challenge for me while it took a long time for me to transform to Hon. Speaker", says Tincy who was the backbone of Model Parliament. It was a new experience for me being a part of the Youth Parliament which gave me knowledge about the legislative functions while developing self confidence to take more tasks in life", shares Samuel with a smile who got a respective position as the Hon. President. 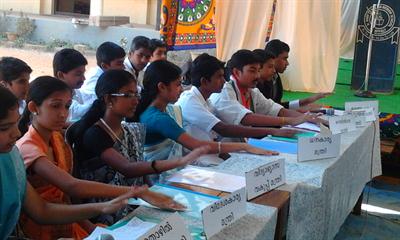 Even though I don't have an image about Sushma Swaraj, the opposition leader in Lok Sabha, I was given the change to enact her which truly was something that I wish to keep alive in my life" says Dona who made her presence lively as the opposition leader. "It gave a unique chance to understand the procedures in the parliament, while I was thrilled to do my role perfect", remembers Libin who enacted as the Secretary General. "I was an opposition MP having a role to ask question to the Defence Minister. The question hour started with my query. I was able to make my presence alive with a question which really kept the minister nailed", giggles Jeni.

Conducted with a motive to create awareness among the students regarding the functions of the legislature, Youth Parliament followed the same procedures as done in the Parliament. Students enacted the role of the ruling as well as opposition party MP's along with Ministers and the Speaker. The procedures included the Presidential address, Oath taking, Obituary reference, Question Hour, Presentation of the women's work protection Bill, Oath taking, Calling attention notice etc.

The event concluded with the opposition boycotting as the speaker not permitting to discuss on a relevant topic raised by them. Academic Coordinator Mr. Jose. S.S spoke on the occasion giving a heartfelt thanks to those behind the screen, participated students and parents who together made it an unforgettable day.

O.E.M Public School situated in Eraviperoor near Thiruvalla keep its head high being one among the schools which an homely environment to the staffs and students. Being a teacher in the school for a year, I am glad to share my experience in the school.

Bethany St.John's school is one of the best schools in Thrissur district. This school was established in the year 1965 by the Bethany Religious Community. This school is one among the few school which teaches moral values towards humanity other than the academic subjects. Let's learn more about this school in the article below.

Mahatma Gandhi Memorial School in Trivananthapuram has gives an immense periodic way for children to learn. Knowledge is Wisdom. Knowledge is Experience. Knowledge is Education. The only way to gain knowledge is Schooling. Knowledge cannot be learned it can be experienced. Many peoples in society put forward their steps to teach knowledge through schooling. The detailed description about this school, facilities and infrastructure are described below in detailed features.

Would you like to know about Sainik School Kazhakootam Trivandrum? Find here Sainik School’s infrastructure facilities, departments, activities and contact address. The Sainik School is one of the greatest school in Kerala.