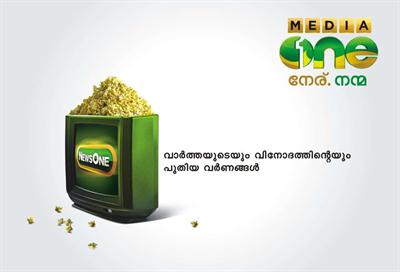 With less than 15 years, Kerala has moved up to develop a unique channel culture which had brought life and light to millions across the world. There are around 20 independent malayalam channels operating from various parts of the state delivering news and entertainment programmes. A team of young talents are working behind and in front of the camera giving tough time for their brain thinking about innovative themes for their respective channels.

Adding one more to the array of channels in malayalam, the latest entry would be Mediaone TV backed up by the legacy of Madhyamam, a popular print media. With Manorama taking a foot step forward with their News Channel, Mathurbhumi too has entered the race followed by Madhyamam.

Owned and operated by Madhyamam Broadcasting Limited, the Mediaone aims to redefine the channel culture delivering value based programs. Upholding the slogan "Neeru Nanma", the mission of the channel is to empower the minorities, dalits and other marginalized groups the channel aims to reach the more heights in a couple of years. Mediaone plans to take a diversion from the conventional visual media formulae giving prime importance on upholding the human and democratic values. All preparations are going on in full swing with its official launch planned to take place on 10th February 2013.

With a main studio set up at Velliparamba, Kozhikode, the channel will be having mini news studios to be made available in major cities of India. With Dr. Abdussalam Ahmed heading the channel as CEO, well known media personality Babu Bharadwaj is positioned as the program Editor.

With a true planning, the channel does want to promote them as a media symbolizing the voice of the voiceless. Media One aims to use the visual media for encouraging goodness, engage in independent and creative direction. Having a network spread across the Middle East, Mediaone would reach the heart of Gulf viewers just after its official launch.

The channel will have an array of programmes including News, News based, value entertainment programmes etc. The highlights of Mediaone will be unbiased new reporting, free from commercial motives, best entertainment, promoting cultural values which would reach millions of viewers with superior quality shots.