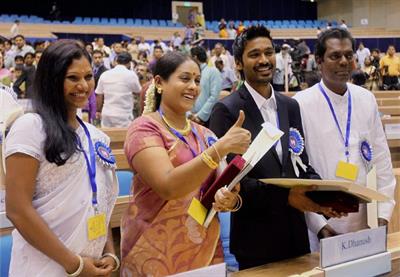 With few days remaining for the announcement of 60th National Films Awards, the names of the winners are still under hush. After the official declaration of the awards made on 18th March, an award show will be held in the month of May at Vigyan Bhavan, New Delhi. Founded in the year of 1954, the National Film Awards is considered to be the 'Oscar of Indian Cinema'. It is being initiated to honour those people who work in the Indian Film industry.

After getting a setback in the previous edition of National Films Awards, Mollywood is keeping high dreams with a record number of movies resting on table of the Jury. According to initial reports, 11 malayalam films which were released in 2012 are under consideration which include Madhupal's Ozhiumuri, Manoj Kana's Chayilyam, Kaliyachan, P Kunjiraman Nair's Kaliyachan, Anjali Menon's Manjadikuru and Shidharth Siva's 101 Chodyangal.

It is much interesting to know that, Kamal's Celluloid which won a number of awards in the recent declared Kerala Film Awards 2012 is not in the fore run other than considering it for a special mention from the Jury. As Celluloid not in the list, Madhupal's Ozhimuri will be the front-runner in Best Film category in Malayalam and also Golden Lotus Award.

Babu Thiruvalla's 'Thanichalla' is competing in the category for Best National Integration movie while Anwar Rasheed's 'Usthad Hotel' represents malayalam for the most popular film category. Joshy Mathew's Black Forest competes in Children's movie section. Kureepuzha Sreekumar(Chayilyam) and Rafeeq Ahmed(Spirit) would be competing face to face for the best lyricist. 9 tamil movies including Kamalhasan's Vishwaroopam will be waiting for the judgment.