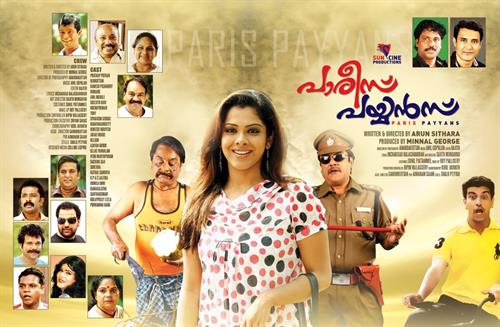 Malayalam movie industry has witnessed a number of acting combinations on screen which truly had kept the viewers under excitement. Not only the storylines, but the casting and songs add more to novelty. Arun Sithara's directorial debut will stand different with its uniqueness of bringing 8 Kerala MLA's onto the singing table.

It is P.C. Vishnunath, Chittayam Gopakumar, Bijimol E.S., Purushan Kadalundi, Saju Paul, V.T. Balram, Kovoor Kunjumon and K.V. Abdul Khader who has brought the Kerala Assembly alive would don the role of singers. To be featured in the harvest song, the MLA's has leand their voice for the tunes set by Anil Gopalan.

It was Arun Sithara (Director), Minal George (producer), and Anil Gopalan(music director) and Vipin Vallassery( Associate) made a touring for 55 days and identified the essence of the singing talent in the MLA's. More than as singers, few among them would be donning full-length characters too.

Another feature of Paris Payyans is the comeback of yesteryear romantic pair Pratap Pothen and Surekha. The couple paired in Thakara, a movie directed by Bharathan 33 years ago which truly had kept romance alive in the heart of the viewers. Prathap Pothen will be seen in three different getups while Surekha acts as his former lover. Being the golden period of malayalam films, the year had witnessed the flow of viewers to the theatres who are ready to accept well build movies.

Anandhakkuttan will crank the camera while Anil Gopal would set tunes for the lyrics of Injakkad Balachandran.

The shooting of the movie will be held at Hotel Sarovaram on 24th March while the shooting is scheduled to start on 25th April at Kochi. Thodupuzha and Bangkok are the main locations of 'Paris Payyans'.

Some time poster says about future of movies.I think this gonna happen here.Anyway MLA singers may be a different idea.And i pray for the film.