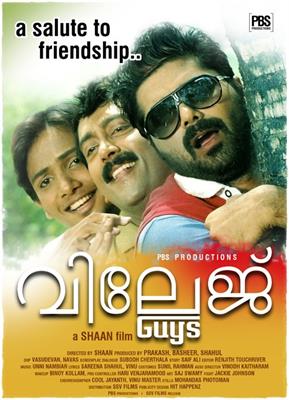 Another bunch of youngsters are gearing up to enthrall the audience with a fresh theme. Directed by Shaan, titled as 'Village Guys', the movie tells the tale of 4 village guys with various backgrounds and the girl who comes into their life. With doors wide open for film making, the young generation is weaving dreams which could keep them move forward.

'Village Guys' revolves around the life of Sudeendran, Anwar, Yadhu, and Achayan, four close friends. Achayan is married while the others stay as bachelors. Sudeendran is the son of a conventional medical practitioner. Anwar lives with his mother.

As the guys have fewer responsibilities, they enjoy their life at its best. They spend their time cracking jokes, making fun of others and doing silly mischiefs. As with the above characters, the villagers kept them away. One day for a reason the four were caught by the police and sent to jail. Even after coming out of the lock up, they were not ready to give up their previous work.

During his travel to the town, Sudeendran meets a girl with whom he falls in love. To be called as love at first sight, Sudhi returns back to the village along with the girl. The arrival of the mysterious lady brings drastic happenings in the life of the four. The problems which were followed affected the life of Sudhi and also his friends and their families. But the story takes the real twist and drives to another phase which makes the movie really interesting.

Being the directorial debut of Shaan, he has tried to give maximum perfection to the screenplay worked out by Subod Cherthala for the story of Saifali. Produced by Prakash, Basheer, and Shahul under the banner of P B S Productions, 'Village Guys' is currently undergoing post production works. The movie will reach theatres in May 2013.