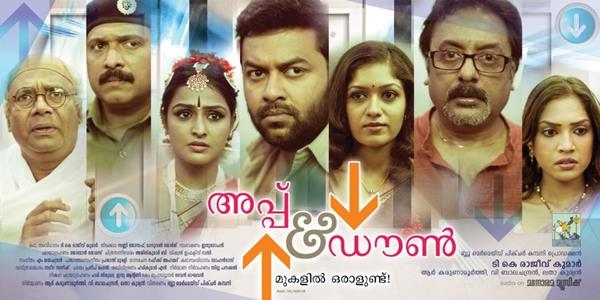 T.K Rajeev Kumar who started his directorial debut with 1989 suspense thriller 'Chanakyan' is back in business with yet another movie which comes under the same genre titled as 'Up & Down- Mukalil Oralund'. Unlike his previous ventures, T K Rajeev Kumar has come up with a theme which adds suspense elements with human feeling and understanding. 'Up & Down' tells the tale of nine people who live in neighbouring apartments of a 25-storeyed flat.

T K Rajeev Kumar gathered the spark for the story from real life incidents. Later he thought of the scope of telling a story about a group of people who got stuck together in a restricted space with less contact with the outer world. 'Up & Down' pools in to the secret relationships among the people stuck in the lift for a couple of hours which later unfolds interesting revelations of each individual.

In the opening stage people climbs into the lift. As staying in a flat, some of them are too familiar with each but others are total strangers. It is all about how each person act in response during difficult situation. Standing shocked in a closed space with no way to move around, every normal human being would act in weird manner which is being portrayed well in the movie.

Having an experience working in the industry for 28 years, Rajeev Kumar is known for his innovative style of presenting each theme which stands different from others. This suspense thriller is presented through a writer who lives a free life and a lift operator which is being donned by Prathap Pothen and Indrajith respectively. With limited space, the director had to exploit the potential of acting talents of the human characters who shouldered the responsibilities.

Even though under tense situation, there will be humour which is being generated under the specific condition. Up and Down is produced by V Balachandran, R Karunamurthi and Latha Kurien Rajeev under the banner of Blue Mermaid Picture Company. For the lyrics of Rafeeq Ahmed, the music is set by M. Jayachandran. For the story of T.K Rajeev Kumar, Sunny Joseph and Manuel George has penned the script while the dialogues were written by G R Indugopan. The cinematography is safe in the hand of Joman Thomas.

With the post production works over, 'Up & Down - Mukalil Oralund' will be released during this Vishu season.