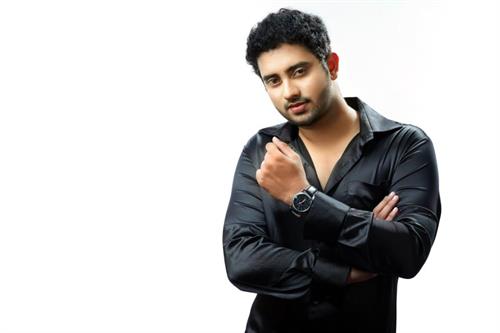 Subin Sunny Thannikkodan who had well made his presence in the modeling industry is gearing up for his big screen debut with 'Climax' which is based on the life of Silk Smitha. It would be dream come true for young Subin who had proved his skill apperaring for ads of Malabar Gold, Wonderla and Kalyan Jwellers.

Directed by Anil, the movie will also have Aravind and Suresh Krishna donning prominent roles. Sana Khan is having a great time who would also be seen in tamil movie Thalaivan and bollywood movie Mental.

In 2011, bollywood movie 'Dirty Picture' based on the biopic of yesteryear actress Silk Smitha directed by Milan Luthria which was produced with a budget of 18 Crore grossed 117 crore worldwide and received several awards and a father in the cap of actress Vidya Balan who portrayed the role of Silk Smitha in the movie.

As being a beginner, Subin took time to adjust with the camera, but later found comfortable giving 100% justice to this character. Produced by P J Thomas, the story and screen play is handled by Antony Eastman who introduced Smitha for the first time before camera.

Even though originally shot in malayalam, the movie will have a tamil version titled as' Nadigaiyin Diary'. For the lyrics of Vayalar Sharath Chandra Varma, Benny Ignatius have moved their magical fingers to set the tunes.

Having high dreams over movies, Subin made modeling as a career to step on the big screen. Subin who is pursuing for MBA likes to take acting as a career. He plays the character role as Suresh Krishna's son, who is a hard core fan of actress Supriya. Climax is all set to release on 19th April 2013.