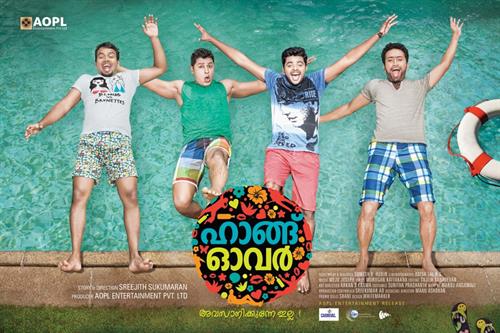 Film maker Kamal known for his versatile style of delivering excellent stories for the malayalee audience is being regarded as a person who has gifted a number of young directors who have kept their foot strong in the malayalam movie industry.

Following the path of Lal Jose, Aashiq Abu and Sugith now it is the turn of Sreejith Sukumaran to show his mettle who had passed out from Kamal's school of direction.

With Hollywood gearing up for the third version of the box office hit 'Hangover', a malayalam movie with the similar title is on the making. Directed by Sreejith Sukumaran, 'Hangover' with a short tag 'Avasinikkunne illa' (Hangover doesn't end) is currently undergoing its shoot.

AOPL entertainments which have helmed projects like 'Violin', 'Second Show' and 'Matinee' is back in business with 'Hang Over'.

The movie will feature Maqbool Salmaan, Shine Tom Chacko, Bhagath Manuel and new face Govind Krishna in lead. The movie is blessed with the magical tunes set by Mejo Joseph for the lyrics penned by Murugan Kattakkada.

Archana Gupta and Sridha will add more joy to the life of the four friends. As the title suggest, the movie will be flavoured with all the essence of a commercial entertainer.

Maqbool Salmaan is having a good time after getting associated with a number of projects. He will be seen in a number of movies in 2013 which include 'Nikah', Prasanth Mambully's 'Love Story', Rafi's 'Ayaal Njaan Alla', Karim's 'Prayan Baaki Vechathu', Anoop Nair's 'Rich N Famous' and 'Dus Thakeer' by debutant Josh. After showing his acting brilliance in Ee Adutha Kaalathu and Chapters, Shine Tom Chacko is looking forward for this movie which does give ample scope to show his mettle.

Bhagath Manuel too is having a couple of projects in kitty including Money Back Policy and Sadharanakkaran. For Govind Krishna, it would be the best platform for him to showcase his acting talents. Having trained in 'Aangik', a contemporary dance form which is a blend of various dances, Govind wishes to make his entry with a bang. So Hangover days are here which will never be over…….