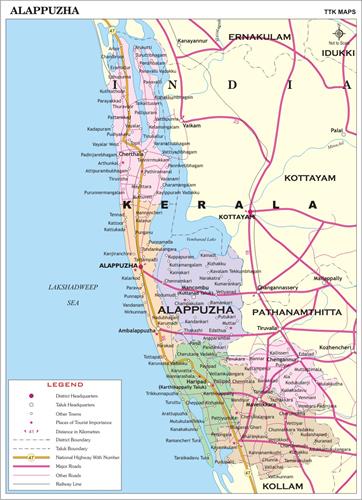 Alappuzha District, formerly called as Alleppey was established in 17th-August-1957 and is considered to be one of the best tourist areas all around India. Kottayam and Pathanamthitta cover its eastern part, Arabian Sea to its west, Ernakulum to its Northern region and Kollam district to its South. 'Lord Curzon' refers this district as "The Venice of the East" as this place is blessed with attractive beaches, backwaters, sceneries, canals, etc. Alappuzha got its name from the two words 'Aal' and 'Puzha' which means 'sea' and 'river'. This was the oldest town formed by and is famous for its coir factories all over the place. According to 2011 census its population is 2,121,943 of which 1,010,252 are males and 1,111,691 are females in which 1,147,027 are urban people and 974,916 are living in rural areas. Thus there exist 1100 females per 1000 males. It covers a total of 1414sq.km of land with tropical climatic conditions.

The district receives an annual rainfall of 299cm having an altitude of 5m above the sea level. Malayalam, Hindi, English and Tamil are the languages spoken here. Alappuzha has the highest population density of 1,501 d/sq.km among other districts and its population growth is 0.61%. About 96.26% of the total population is literate. 'Snake boat race' and 'Nehru Trophy boat race' are the traditional events held here. The Kuttanad paddy field commonly called as 'Rice bowl of Kerala' is famous for the profitable outcome that it makes every year. There is a lighthouse along the costal side of this town which is considered to be the oldest one of this district. The house boating cruise takes more attraction of tourists. This may be the smallest district of Kerala but it is the most beautiful site for tourism.

Alappuzha was a small town founded out in 1762 by a Divan named 'Raja Keshawadasan' of Travancore and was established in 17th-August-1957. The district was called as 'Alleppey' during British reign but by 1990 the Kerala Government decided to call it 'Alappuzha' which will suit the culture of the land. From past onwards Kuttanad had great demand and was a perfect recreation site. An Anglican Church was built up here in 1851 and society of the Missionary Church had set up its local headquarters here. Thiruvalla, Mavelikkara and Chengannoor later became a part of Pathanamthitta district from here. Alappuzha was the first to have a post office in Travancore. There was a time when Alappuzha was called as 'the Venice of the East' with great trade of coir products and fast running factories but is now a dying town.

Alappuzha was a district that had played a great role in the struggle for freedom. An inspiring journalist named T.K. Madhavan struggled hard to whip out untouchability from the district by conducting campaign and had also provided roadways for the Hindus to their temple. In 1938, Kerala faced the first political strike here with great inspirational movements made by the leaders. 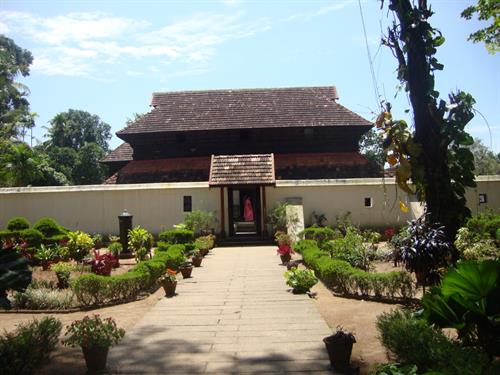 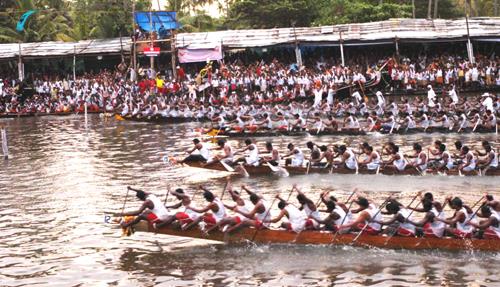 Rather than these there are lots of other places for the tourists like Arthunkal, Mullackal Raja Rajeswari Temple, Punnappra, Sherthala, Chengannoor, Mavelikara, Mannar Sala Sri Nagaraja Temple, Kayamkulam and lots more. The visitors will feel like a paradise when they enjoy their holiday trips here in Alleppey.