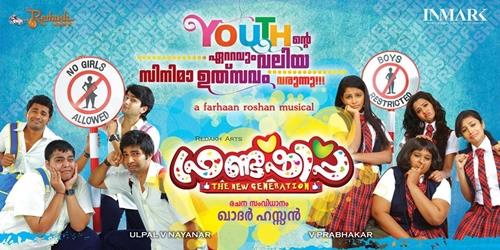 Khader Hassan who has introduced Allu Arjun to malayalam movie enthusiasts is gearing up to don the role of a director. The movie titled 'Friendship' would be Khader Hassan's directorial debut which tells the tale of love and friendship.

This movie which is simultaneously made in Malayalam and Tamil is a triangular love story which is much connected with the life style of the present youth. This movie will be a platform for many new faces. Young music director Farhan Roshan has set the tunes which would also make this movie a musical entertainer too.

With the present generation much keen to get attached to their opposite gender, there develops friendship which is filled with various colours of excitement. Even though there had been a number of movies made in malayalam which tells about friendship, campus and love, this movie should be viewed in a different angle.

Four girls who studied at a girls school from childhood to plus two happens to meet four boys who were also compelled to spend their school days in a boy's school. The team of eight joins the Stephen's coach centre for Engineering coaching. It was a new experience for them, enjoying their time in the mixed college.

The up & downs in the friendship is being plotted in a natural way. Sreejith Vijay is playing the role of a college student named Rahul in this movie along with a bunch of newbies. Creamed with a love story, it is something that the youngsters of today can relate to their life too.

Added with the essence of celebrations and fun, Friendship is packed with all commercial elements to entertain the young generation. Sreejith says that he enjoyed the shooting and the team had a great fun at the location. With the final wrap up and post production works, this movie would reach theatres in August 2013.