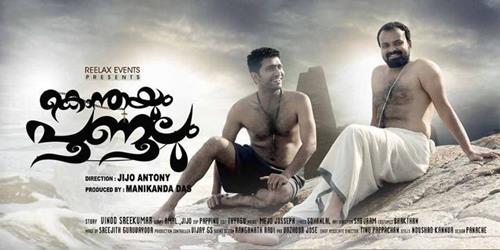 Debutante Jijo Antony has teamed up with Kunchacko Boban and Bhama for a movie which is centered upon a family theme. To be produced by Mani under the banner of Relax Entertainment, the story of the movie has been written by Vinod Sreekumar.

With Amal Nath and Jijo Antony worked behind for the screenplay, Kalabhavan Mani, Lena, Soumya, Sijurose, Manoj K Jayan, Kalabhavan Mani, Prem Kumar, Joy Mathew and Saiju Kurup would give life to other prominent characters in this movie. 'Konthayum Poonoolum' will be blessed with the mesmerizing tunes set by Mejo Joseph.

Earlier titled 'Oru Rathri Randu Pakal', the movie got a name change as 'Konthayum Poonoolum'. After Sakudumbam Syamala and Sevens, Kunchacko Boban and Bhama are sharing screen space together for a movie. Bhama would appear as the mother of a one–year-old child in 'Konthayum Poonoolum'. 'With the shooting progressing at various locations in Trivandrum, the movie would keep the audience intact. Konthayum Poonoolum' as titled would be a family drama which has due relationship with religion.

Kunchacko Boban and Bama are tight packed with their own respective projects. Kunchacko Boban is happy with the positive responses for 'Pullipulikalum Aattinkuttiyum' which is currently running in theatres. His upcoming ventures include Katha Veedu, Motor Cycle Diaries, Law Point and an untitled movie to be directed by Vyshakh. On the other side, Bhama is keeping an eye on the release of 100 Degree Celsius, Katha Veedu and D Company in Malayalam, Barfi, Appayya and Ambara in Kannada.

With more than 80 plus malayalam movies under pre production, it would not be wonder if the number touches the dream '200'. But the most disturbing fact is that, only very less movies could only get back the respect from the audience. Even much hyped movies could not do well business in the box office. The audience is ready to accept those movies which carry the soul of real life.